How to avoid merger mishaps

“Reorganizations are dangerous,” cautioned Paul Chapin, a retired civil servant with more than 30 years experience at DFAIT-. “They aspire to improving matters, but the disruption they produce, and the productivity losses that they cause make a shambles of the great majority of reorganizations.”

The success of the CIDA-DFAIT merger, which is included in the 2013 budget implementation bill, hinges on several stipulations, the witnesses said.

The foreign affairs and development committee was tasked with studying the merger part of the legislation in two sessions, on May 21 and 23, and can now make recommendations to the House finance committee.

The witnesses expressed hope and optimism that the amalgamation would go more smoothly than in the past, when international trade was re-merged with foreign affairs in 2006.

Colin Robertson, who was a Canadian foreign service officer for more than 30 years until 2010, told the committee that the 2006 re-integration of the divorced departments was a move that “sapped energy,” because, “the best talent was devoted not to advancing the national interest, but moving boxes around in what was a rather painful, and draining bureaucratic odyssey.”

To avoid a repeat of past merger mishaps and mismanagement, the three witnesses—which also included Lucien Bradet, president and CEO of the Canadian Council on Africa—made several key recommendations including that Canada is in dire need of a cohesive and clear foreign policy strategy.

“If this is to work, I think the government needs to articulate, at least in broad terms, what it’s hoping to achieve—not necessarily with the restructuring, but in its international agenda,” said Mr. Chapin.

“We need to do a much better job of exploring big trends in places like Africa and Latin America, and others, then select the ones that matter to Canadians,” he added. “There is a Canadian interest here. The Canadian taxpayers are shelling out this money, so they’re entitled to know that there’s something in it for Canada, and it’s not entirely altruism.”

“It’s one thing to say we’re going to align development to foreign policy interests, but in doing so are you de facto reviewing your foreign policy?” he questioned.

Policy formation is a key role of the department, said Mr. Robertson, who added that it is the committee’s responsibility to bring in policy experts from DFAIT to present current trends and priorities.

During the meeting, NDP foreign affairs critic Paul Dewar also questioned how international development priorities could possibly be aligned with the rest of Canadian foreign policy, when he argued there isn’t one.

“You’ll hear [in] speeches…comments like, ‘We’re in favour of freedom and democracy,’ as if anyone isn’t,” he said.

“I would challenge anyone around this table to tell us exactly where you go and find [on the] Foreign Affairs…website anywhere, what is our foreign policy.”

In response, Parliamentary Secretary to the Minister of International Co-operation Lois Brown wrote in an email to Embassy that “Canada’s foreign policy rests on the Canadian values of freedom, democracy, human rights, and the rule of law. Our foreign minister consistently keeps Canadians up to date.”

Media reports have detailed that the Conservative government started working on creating a foreign policy plan after John Baird was named foreign minister in 2011. The Canadian Press later reported on a draft plan that indicated that China is key among more than a dozen priority countries, as well as India, Indonesia, Mexico, Brazil, Turkey, North Korea, and South Africa.

Mr. Robertson raised another question that still hasn’t been answered: where the physical fusion will take place—or will it?

Mr. Robertson recommended that CIDA employees not be left isolated across the river at the agency’s current headquarters in Gatineau, Que. DFAIT’s headquarters is on Sussex Drive in Ottawa.

He suggested that employees working on the trade, development, and diplomatic files for a certain country or region should all share a common workspace so they can collaborate.

Mr. Robertson said he has seen this done in the past, and “it meant that you lunch together, and it meant that when you walked down the hall, you talked together. The worst thing we can do in this integration would be to leave the silos.”

“I think that’s an extremely important point,” said Hélène Laverdière, the NDP critic for international development and a former DFAIT employee, in a later interview.

“So many issues are solved around the coffee machine or in the corridors.”

Mr. Robertson stressed that there needs to be a clearer outline of how the move will actually work, in terms of combining priorities, administration, staff, physical space, and policies.

Ms. Laverdière said she also found this suggestion extremely important. She lamented what she said was a lack of details coming from the government.

But Ms. Brown wrote, “The budget is simply the signalling of the start of the amalgamation process, to comment on timeframes would be premature at this point.” She added that all options, including changes to physical space, are being examined to find an effective and efficient structure for the new department.

Mr. Chapin also stressed the need to maximize people-potential in the new department.

“It’s going to be people who make this work,” he said. “Structure and reorganization is not going to cut it by itself.”

And bringing the right people around the table is what makes the merger a good idea, added Mr. Bradet. The ministers and top officials for all three files related to foreign affairs need to sit around the same table regularly and talk, he argued.

Building a fence around budgets

The last issue raised by the witnesses was a lack of clarity in the legislation on how the new department will deal with doling out money.

“It’s a question of appropriation and budgetary allocations,” said Mr. Bradet. “I’m nervous about that.”

Mr. Bradet questioned whether there would be a fence around each portfolio’s budget at the new department.

“I think Canadians will want to be assured that in the new department, there are no grey zones when it comes to the use of funds for international development,” he said.

Ms. Laverdière said outlining the protocol in legislation for this is difficult, but that there needs to be a discussion about creating a framework for budgets and transparency for spending.

Mr. Robertson also raised an eyebrow at how the new department will handle the influx of money.

“With an extra $4 billion of the [Canadian] people’s money in its wallet, will the new Foreign Affairs and International Trade and Development Department’s culture be up to the task?”

He pointed out that “CIDA has embraced results-based reporting and open data,” and asked, “will the new department embrace this approach?” 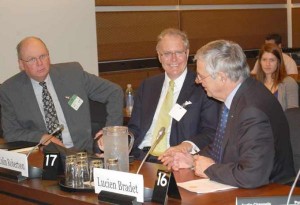