Canada-U.S. relations: In praise of the ‘hidden wiring’

By Colin Robertson, Special to The Vancouver Sun July 20, 2011 (also in the Ottawa Citizen, July 22 as ‘U.S. relations much more than Obama, Harper’ 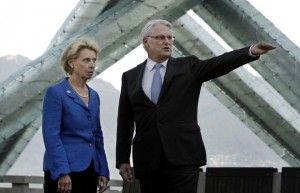 Washington Governor Christine Gregoire (left) and then-B.C. Premier Gordon Campbell, pictured last October, exemplified the merits of inter-governmental ‘hidden wiring’ when they cooperated on the smart driver’s licence for easier passage across the border. Photograph by: Lyle Stafford, Reuters files
Words and deeds of prime ministers and presidents dominate the headlines in international affairs. But in the world of Canada-US relations, where the relationship is as much domestic as international, it is the “hidden wiring” of premiers and governors and legislators that merits more attention. Their behind-the-headlines efforts are where a great deal of problem-solving gets done.
Take the smart driver’s licence. It was the brainchild of former British Columbia Premier Gordon Campbell and Washington Governor Christine Gregoire who recognized that requiring a passport was an expensive and time-consuming obstacle for those who wanted to attend the 2010 Olympics. Championed by the Pacific Northwest Economic Region (PNWER), especially the legislators that make up the partnership of the ten states, provinces and territories, their efforts persuaded the Department of Homeland Security to accept the new license containing an embedded RFID chip. Now it is available in most border states and provinces, although we need to do more to promote its use.
The asymmetries of the relationship — the US market provides half of our GDP — means that Canadians usually have to take the initiative with the US. Fortunately, we’ve created a series of fora where leaders and legislators at the state, provincial and territorial level get together to discuss and resolve shared challenges.
Earlier this month New England governors met with Atlantic premiers in Halifax, something they have done since 1978, pioneering agreements on acid rain and the development of ‘smart’ energy. The Compact (2005) between the Great Lakes and St. Lawrence basin governors and premiers provides for ongoing stewardship of these waters and prevents any diversion. Western governors and premiers have long attended each others’ summer sessions and over the barbecue pit they’ve dealt with everything from wildlife to water and helped make progress on the Canamex corridor and the Hydrogen Highway.The provinces have embedded themselves as affiliates into the Council of State Governments that meet regularly in their regional fora. This week legislators from Ontario, Manitoba, Saskatchewan and Alberta met with their Midwest state counterparts in Indianapolis and adopted resolutions in support of Beyond-the-Border and endorsing for air travel the smart drivers license that is now accepted for land and marine travel. It’s practical problem-solving at the grass roots level.
Much of the work is informational — few Americans appreciate the importance of Canadian hydro-power or the oil and gas that flows through our pipelines. Americans are surprised when told their biggest market is Canada and that their trade with Canada continues to outpace, by a wide margin, that with the EU, China or India. Legislator-to-legislator these are vital word-of-mouth conversations that serve Canadian interests.
Cultivating relationships with governors and state legislators is also smart for the longer term. Eight years ago, Barack Obama, was a state senator from Illinois. Four of the last six presidents — Carter, Reagan, Clinton and George W. Bush — served as governors.
The premiers meet this week in Vancouver and the United States relationship is a standing item on the Council of the Federation agenda. Both U.S. Ambassador Jacobson and Canadian Ambassador (and former Premier) Doer will be there. Their efforts in tandem with those of the premiers and governors made the difference in securing easy passage of the 2010 reciprocity agreement on procurement.
Now we need to get Americans enthused and committed to the Beyond-the-Border and the regulatory initiatives launched by Prime Minister Harper and President Obama. The Canadian business community is engaging their American counterparts but success requires ‘all hands’, especially at the state and local level. Our message is simple: supply chain dynamics is what creates jobs and revenue and keeps us globally competitive. Business gets it, but the politics of local and special interests are a powerful countervailing force to mutual benefits of deepening integration.
A priority for the premiers should be to persuade governors to institutionalize the Canada-US agenda within the National Governors’ Association (NGA) meetings, as legislators are doing through the councils of state governments. If the premiers could get the NGA to make the Canadian relationship a standing agenda item at its annual summer meeting, it would be a big step forward. Regularizing the dialogue is how we ‘level the playing field’.
Another way to look at the Canada-US relationship is through the prism of the 64 states, provinces and territories that make up our two federations. The people-to-people relationships, and the mutually dependent jobs — 11 million in Canada and another 8 million in the US – have always outpaced the politics. Since 9-11, the political level has been playing catch-up. The collective work of the “hidden wiring” — premiers and governors, state, provincial and territorial legislators — is advancing our shared interests.