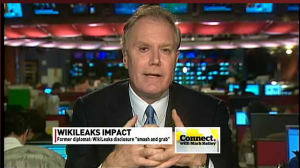 The United States rushed into damage control Sunday as media around the world began reporting on thousands of classified diplomatic documents released to a handful of news organizations by WikiLeaks.

Colin Robertson, the vice president of the Canadian Defence and Foreign Affairs Institute, said the leaked cables could be dangerous for U.S. officials because of their degree of detail.

“They’re pretty explicit about who was at the meeting and who was accompanying who,” he said. “Certainly in the context of the Middle East, where the objective of the United States is to reach a peace settlement… these cables are actually very high-level.”

They could even pose an obstacle, he said, to making headway in already fraught, U.S.-brokered negotiations for a peace deal between the Israelis and the Palestinians.

“When you make all this stuff public in the midst of ongoing negotiations, it certainly does a lot to undermine trust, which is really the basis of international negotiations,” Robertson told CTV News Channel.