OTTAWA — Canada’s trade minister is downplaying the forthcoming departure of China’s outspoken envoy to Ottawa, saying differences between the countries stretch beyond anything at the ambassador’s level.
about 6 hours ago by: Canadian Press 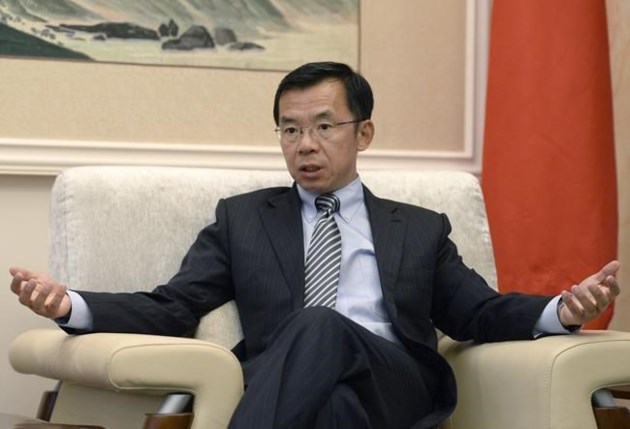 OTTAWA — Canada’s trade minister is downplaying the forthcoming departure of China’s outspoken envoy to Ottawa, saying differences between the countries stretch beyond anything at the ambassador’s level.

In an interview Wednesday, Jim Carr said the federal government is awaiting China’s decision on its replacement for outgoing ambassador Lu Shaye, who has had harsh words for Canada during a tenure that began in 2017.

“I don’t think that personalities are what would be at the centre of the issue here,” Carr said when asked about Lu’s past criticisms.

“The job of the ambassador is to express the view of his government. I would only assume that whatever is being spoken by the Chinese ambassador to Canada has the full support of the government, so this is an issue that goes beyond the ambassadorial level.”

Sources say Lu, who appeared to be more comfortable speaking French than English, will leave his Ottawa post in the coming weeks for a new position in Paris. Lu, 54, has also served as China’s ambassador to Senegal and as a counsellor for its foreign service in France, according to a biography on the embassy’s website.

His departure comes at a time, as Lu himself described in an interview Tuesday, of “serious difficulties” between the two countries.

Canada’s relationship with its second-biggest trading partner has deteriorated rapidly since the December arrest of a senior Huawei executive in Vancouver following an extradition request by the United States.

China was outraged by the arrest of Meng Wanzhou and has since detained two Canadians on allegations of espionage, sentenced two Canadians to death for drug-related convictions and blocked key agricultural shipments such as canola.

Lu has used strong words when talking about the relationship — for example, he has called Meng’s arrest the “backstabbing” of a friend and evidence of white supremacism.

He also warned of unspecified “repercussions” if the federal government bars Huawei from selling equipment to build a next-generation 5G wireless network in Canada.

Lu was critical of Canada before Meng’s arrest. Soon after arriving in Canada, Lu said he was struck by the negative view of China that he saw taking shape. In a 2017 interview, he blamed the Canadian media for disseminating a negative portrait of his country that depicted it as an abuser of human rights and of lacking democracy.

He said Canadian politicians sometimes had to “bow before media.”

In Lu’s interview Tuesday with The Canadian Press, he said China was not to blame for the ongoing dispute.

“But the Chinese government is waiting to make a joint effort with the Canadian side and meet each other halfway,” he said without specifying the necessary steps toward a resolution.

When asked about the possibility of freeing Michael Kovrig and Michael Spavor — the Canadians detained in China on espionage charges — Lu said their fates are in the hands of Chinese authorities. On China’s rejection of Canadian canola imports over Chinese allegations of pests, he considers the matter closed.

Carr said the Liberal government still hopes to solve the bilateral differences by engaging China on many levels, not just through an ambassador.

“We will reach out to whomever is in that place and make the same arguments to him or her that we’re making now,” Carr said before leaving for Japan on a trade mission to find new markets for Canadian products, including canola.

Carr said Canada is still keen to send government inspectors to China to explore evidence of pests in the canola shipments. But, he added, China has not invited Canadian experts to do so, and there has been no high-level engagement on the matter despite Canada’s efforts.

This week, China increased inspections of Canadian pork products over its concerns about smuggling and African swine fever — an illness that can be devastating among pigs. It came in addition to previously stated Chinese complaints over the labelling of Canadian pork.

Asked Wednesday if the inspections were a sign the dispute had reached a new level, Agriculture Minister Marie-Claude Bibeau declined to speculate and said: “I don’t want to escalate the situation.”

Word of Lu’s departure comes at a time when Canada does not have an ambassador in Beijing. Last winter, Prime Minister Justin Trudeau fired Canada’s ambassador, John McCallum, for going off-script in the government’s efforts to win the release of Kovrig and Spavor. Before his posting to Beijing, McCallum was a longtime Liberal MP and cabinet minister.

“We need to find a way to engage,” he said. “Not having ambassadors who are reliable or trusted is a major handicap.”

Lu did a good job of publicly reflecting the Chinese government’s positions and “seemed to take relish in putting it to us,” Robertson added.

“His words aggravated the situation. Behind closed doors ambassadors are also expected to find solutions and try to nuance divisions. Here I see no evidence of serious effort by Lu Shaye.”