CPAC John Baird’s Legacy Participants assess John Baird’s tenure as foreign affairs minister and discuss whether or not his achievements have positioned Canada to better pursue its foreign policy objectives. The panellists are Peter Jones and David Petrasek (University of Ottawa) and former Canadian diplomat Colin Robertson. John Baird served as foreign affairs minister since in 2011. In February 2015, Baird announced he was stepping down from his position as foreign minister and would not run in the next general election. (February 10, 2015) 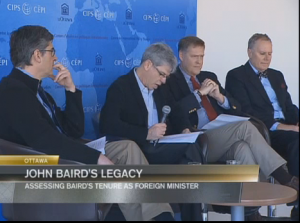 It used to be, back when David Petrasek was working in human rights and conflict resolution for the United Nations in Geneva, that Canadians would explain Americans to Europeans.

“Now, I think Americans have been explaining Canadians. The Americans understand that the roles have changed.”

Petrasek, who is now an associate professor in the graduate school of public and international affairs at the University of Ottawa, recently joined colleague Peter Jones and retired diplomat Colin Robertson on a University of Ottawa panel discussing former foreign minister John Baird’s legacy.

Baird’s “values-driven” agenda was a focus of the discussion.

“The idea that Mr. Baird can say he ran a values-driven foreign policy is problematic in that he did so selectively,” Jones said. “If one is going to make values the basis of one’s approach, one has to implement them across the board or at least be seen as trying to.”

He said Baird’s “unequivocal support for Israel’s right wing” played well with the Conservative voter base back here in Canada, “but I’m not sure (it) was playing well in terms of Canada’s broader interests, nor in Canada’s role in the region.”

He even went so far as to say that “to the extent that these terrorists really do want to attack Canada, I think his rhetoric probably moved us up a notch or two on (the terrorists’) list.” He also noted that Canada’s “uncritical support of Israel”  was not appreciated in Washington.

And, he said, Baird “openly castigated, if not dismissed,” Canada’s traditional role of trying to foster dialogue between the parties in the region.

“After four years, he left Canada in a weaker position on human rights,” Petrasek said. Proponents argue it was principled policy in defence of human rights, that he effectively advanced new initiatives.

But Petrasek said that as a principled human rights defender, you speak out, regardless of the victim and perpetrator. He noted that Baird never spoke publicly about the records of certain Middle Eastern countries.

“He might have done so in private, but his public statements emphasized security and stability, which played to the anti-democratic nature of those regimes,” he said.

Petrasek said he couldn’t find any public declaration that Israeli settlements are illegal, which is official Canadian policy. “Those settlements are the source of so many human rights abuses. He never spoke clearly on that.”

“These were new initiatives and good initiatives, but they were pursued in a partisan manner,” Petrasek said.

Finally, he said, Baird was hostile towards the UN. “If you want to advance issues like child marriage, you  have to work with these multilateral institutions that are far from perfect. But the point is that you sit down and try to make them better, to reform them. He completely ignored them.”

Robertson was more complimentary, giving Baird credit for his dignity agenda and lauding his commitment to Israel as “genuine and heartfelt.” He had two virtues of any good foreign minister, Robertson said: “He had a strong constitution and he loved to travel.” Baird is said to have visited more than 90 countries.

“On the UN, he came with all the prejudices shared by Stephen Harper, but over time, I think he began to see (its) value.” OTTAWA — “I have seen the stature of our country grow, in the eyes of the world … Today, Canada stands tall in the world.” — Foreign Affairs Minister John Baird in his resignation speech in the House of Commons, Feb. 3.

As he was saying his goodbyes in the House of Commons, Baird called the country more respected internationally, citing Canada’s fight against terrorism, standing “side by side” with Israel, having “strong partners” in the Arab world and opposing the “militaristic expansionism” of Russia’s Vladimir Putin in Ukraine — all while promoting trade, especially in Asia.

But the sight of Baird’s motorcade being pelted with eggs and shoes last month in the West Bank capital of Ramallah reminded many of the government’s controversial pro-Israeli policy, which has sparked heated criticism.

And what about Canada’s historic loss of a temporary seat on the United Nations Security Council in 2010 — a first in six decades — to tiny, economically battered Portugal?

Does Canada actually have more stature than it did before 2011, when Baird arrived at Foreign Affairs? Or since 2006, when the Conservatives came to power?

Spoiler alert: The Canadian Press Baloney Meter is a dispassionate examination of political statements culminating in a ranking of accuracy on a scale of “no baloney” to “full of baloney” (complete methodology below).

Baird’s claim that Canada’s international stature has grown contains “some baloney.” Here’s why:

Canada has long scored well in an annual poll of global attitudes by the British Broadcasting Corporation. In 2014, the BBC World Service and GlobeScan/Pipa poll asked 24,500 international respondents whether they viewed 17 specific countries positively or negatively. Canada came second, behind Germany. Iran was last.

The United Nations Human Development Index is another indicator that many rely on to measure one country’s standing with another. The HDI combines data on health, education and gross national income to come up with a ranking among more than 190 countries that the UN says “can stimulate debate about government policy priorities.”

International spending also provides a barometer of global standing. Canada’s defence spending is down to about one per cent of gross domestic product from 1.3 per cent in 2009, while foreign aid has gone from 0.34 of GDP in 2010-11 to 0.27 per cent in 2013-14, says the Paris-based Organization for Economic Co-operation and Development, which measures growth and progress among 34 leading countries.

What the experts say

Heinbecker cited a “truculent” attitude towards the UN, on which the Harper government has repeatedly turned its back. Canada is the only NATO country not to sign the UN’s Arms Trade Treaty and the only country in world to withdraw from its Convention to Combat Desertification.

On the other hand, Fen Hampson, head of CIGI’s global security program, cited the BBC’s annual country survey as a good indicator of global attitudes towards any country, including Canada.

“You can pick any elite diplomat you want to make a case for or against the government,” said Hampson.

But the BBC poll is a strong indicator that Canada’s “brand” has not suffered under the Conservatives, Robertson said, contradicting anecdotal feelings of slippage that might be harboured by some.

Canada has fallen on a number of fronts, said David Biette, director of the Canada Institute at the Woodrow Wilson International Center for Scholars in Washington.

Biette cited the fact that it has not emerged as the “energy superpower” Stephen Harper predicted in 2006, its “blind support” of Israel and its “botched” attempt to secure a coveted seat on the UN Security Council in 2010.

That said, Canada’s international reputation might be intact simply because a lot people don’t pay attention to the country from abroad, he added.

Taking all of that into account, Baird’s claim that Canada’s international stature has grown and that the country stands tall in the world contains “some baloney.”

The Baloney Meter is a project of The Canadian Press that examines the level of accuracy in statements made by politicians. Each claim is researched and assigned a rating based on the following scale:

No baloney – the statement is completely accurate

Full of baloney – the statement is completely inaccurate