The New Fukuyama: Spreading the Blame for Liberalism’s Discontents 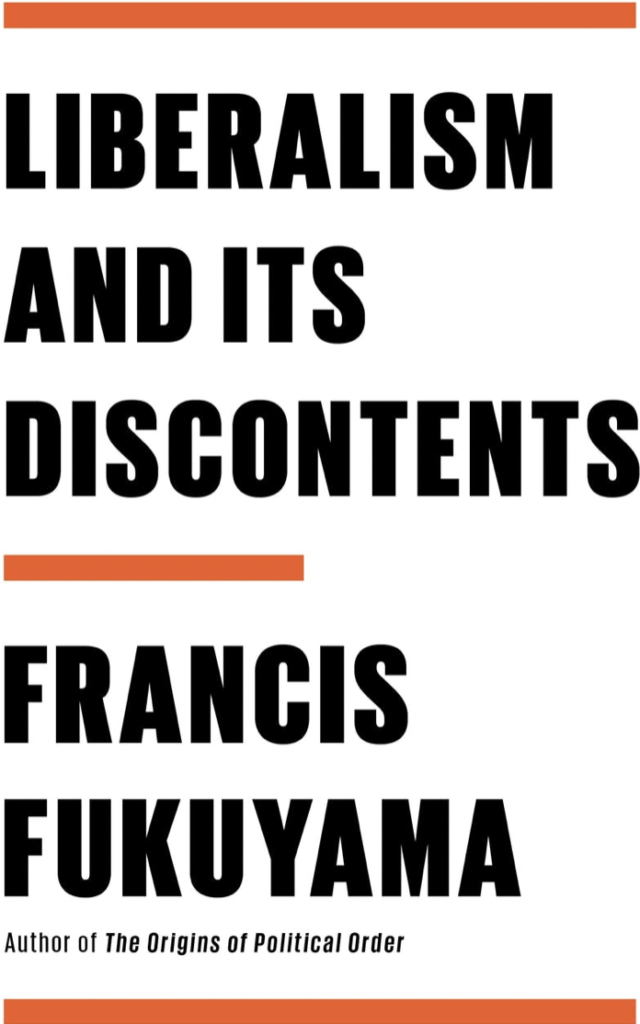 Liberalism and Its Discontents

Liberalism and its Discontents is a defence of liberalism by Francis Fukuyama, who made the transition from niche political scientist to literary rock star — with all the credit, blame and controversy that provokes — with the publication of his bestseller The End of History and the Last Man in 1992.

In The End of History, Fukuyama famously declared that liberal democracy was the form of human government that best served humanity’s aspirations — a conclusion some players both political and geopolitical have spent the three intervening decades pushing back against. Expanding on an essay he had written in 1989 for The National Interest just prior to the fall of the Berlin Wall, it caught the zeitgeist of the end of the Cold War. Subsequent books looked at questions around trust and human nature, development and technology and their relationship to governance.

Posted at the time to our embassy in Washington, I would regularly call on Frank Fukuyama to get his assessment of the state of America, chatting with him in his office at at the Johns Hopkins School of Advanced International Studies on Embassy Row. With George W. Bush in his second term and the war in Iraq having turned sour, Fukuyama thought that Americans could become more isolationist and less idealist and that they wanted ‘less government’ and less ‘adventurism’ abroad. We would continue our conversation after he moved to Stanford. This review also draws from a Zoom call we did for a CGAI Global Exchange podcast.

For much of the past decade, Fukuyama — now Olivier Nomellini Senior Fellow at Stanford — has focused on democracy. He published two magisterial volumes:  The Origins of Political Order: from Prehuman Times to the French Revolution (2011) and Political Order and Political Decay: From the Industrial Revolution to the the Globalization of Democracy (2014). In 2018, he published Identity: The Demand for Dignity and the Politics of Resentment. Now, we have Fukuyama’s defence of liberalism in a slim volume — at 192 pages — whose title is a play on Sigmund Freud’s classic Civilization and Its Discontents.

For Fukuyama, liberalism is the “limitation of the powers of governments through law and ultimately constitutions, creating institutions protecting the rights of individuals living under their jurisdiction.” Liberalism is based on the principles of equality, the rule of law to ensure accountability, and the unalienable rights of individuals to what the Founding Fathers defined in the US Declaration of Independence as ‘life, liberty and the pursuit of happiness’. It is underpinned by representative government to guarantee liberty while providing order and stability.

Classical liberalism, writes Fukuyama, is a big tent encompassing a range of political views that nonetheless agree on the foundational importance of equal individual rights, law, and freedom. Liberalism became a “pragmatic tool” for resolving conflicts in diverse societies, lowering the temperature of politics by parsing apparently irreconcilable divides over cultural and political issues into component parts and then providing remedies. This often involves addressing particular local circumstances and coming up with fixes that either takes the steam out of the issue or buys times for more measured consideration. Over time, writes Fukuyama, liberalism became more than just a mechanism for pragmatically avoiding violent conflict, but also a means of protecting fundamental human dignity.

But what once was taken for granted is today under severe threat as would-be authoritarians such as Donald Trump, Viktor Orbán, Recep Tayyip Erdoğan and Jair Bolsonaro use their electoral mandates to attack democracy, including by undermining the courts and justice system, delegitimizing the press by labeling mainstream media as “enemies of the people”, and corrupting professional bureaucracies and turning them into partisan instruments. It is no accident, writes Fukuyama, that Orbán puts himself forward as a proponent of the oxymoronic model of “illiberal democracy.”

Liberalism and its Discontents takes us from the Greeks, for whom liberalism was ‘nothing in excess’ through the religious wars of the 16th and 17th centuries, democratization in the 19th and 20th centuries, and the neoliberalism of the 1980s and 1990s. Today, says Fukuyama, liberalism faces attacks from enemies abroad and at home as well as from the pernicious effect of social media and a weakened free press.

The autocrats – China’s Xi Jinping and Russia’s Vladimir Putin — offer an alternative authoritarian system based on state enterprise and near-total surveillance aligned to a system of what the Chinese call ‘social credit’ designed to keep the population in check. Both Xi and Putin posit that the West is decadent and in decline, and, as Putin told the Financial Times, liberalism has “become obsolete.”

At home, liberalism faces attacks from both conservatives and progressives. They share a common contempt for liberalism and globalism and an attraction to populism, although from different perspectives. It is to this challenge that Fukuyama devotes his attention.

For the right, liberalism is incompatible with their fixations on nationalism, economic freedom and culture. Fukuyama writes that discontent from the right goes deeper than the ambitions of a handful of populist politicians. They would not be successful were they not riding a wave of discontent with some of the underlying characteristics of our current society especially the feeling of the working class that the system only works for the elite and that their children will be even worse off. Similarely, in trying to rectify past injustices through privileges or entitlements for designated groups, governments create new resentments that are fodder for populists.

For the left, liberalism is an affront to their focus on identity politics and social justice. While the challenge from the left is less direct, Fukuyama warns that it is equally pernicious. He points to the media, the arts and academe as especially susceptible to self or peer-censorship in their writing, speaking and teaching.

To deal with the discontents. Fukuyama offers solutions and hope.

While America’s checks and balances limit the possibility of the kind of reforms desired by young progressives, they also protected the country from attempted abuses of power by Donald Trump.

For pluralistic nations, Fukuyama points to federalism as a proven formula to meet regional, religious and linguistic needs. Voting: the casting, counting, and certification of which is a fundamental right, must be defended. For democratic deliberation and compromise, privacy is a necessary condition if individuals are ever expected to be honest about their views.

Solving inequality depends as much on family and community and access to good health care and education as government intervention. Social policy should be directed at fluid categories such as class rather than fixed ones like race or ethnicity. Inequality in group outcomes, he writes, is a by-product of multiple interacting social and economic factors, many of which are well beyond the ability of policy to correct. Our political leaders, says Fukuyama, have a responsibility to revive public-spiritedness, tolerance, open-mindedness, and active engagement in public affairs.

For those of us troubled by the distemper currently afflicting our politics and public policy, Fukuyama is a necessary read. Restoring trust in government and our public institutions is essential. Somehow, we have got to find our way out of the mean narrowness of the right and the left’s fixation on equality of result over equality of opportunity, as Fukuyama presents it.

Reinvigorating what historian Arthur Schlesinger once called the vital centre will require active civic engagement, new ideas, and perhaps new parties and certainly new leadership. In the meantime, as Fukuyama concludes, we can still learn much from the wisdom of the Greeks and their belief in moderation and nothing in excess. “Moderation is not a bad political principle in general,” he writes, “and especially for a liberal order that was meant to calm political passions from the start.”

Advice both timely and timeless.