Pod save us all: the growing role of political podcasts in election 2019

As podcasts continue to soar both in number and in popularity, podcasters are playing an increasingly important role in political debates around the world. It’s no different here in Canada, with a number of Canadian political podcasts, such as CBC’s Party Lines and Kevin Newman’s Attention Control, created specifically for election coverage.

Others, such as The Herle Burly, modified their format specifically for the election, and  The Herle Burly has multiple journalists, bureau chiefs, high-level communications experts—and even Pamela Anderson—voicing their enthusiasm for the show on social media.

The Hill Times spoke with some podcast hosts taking a deeper dive into the political nitty-gritty, within a medium that only continues to grow in popularity.

In an interview with The Hill Times, David Herle said he started The Herle Burly to contribute to an informed dialogue about the future.

“I really think there are so many enormous issues that are facing us as people, and I had been, through my time, active in politics, and getting increasingly disturbed about how low [in] information the dialogue was, and how talking points were back and forth, and I thought things were more complex than that,” said Mr. Herle.

Currently a principal partner at the PR firm The Gandalf Group, Mr. Herle, a Saskatchewan Roughriders fan who hails from the province, was the federal Liberal campaign co-chair in 2004 and 2006, and worked on former Ontario premier Kathleen Wynne’s campaigns in 2014 and 2018.

Mr. Herle said he’s been privileged to have “stunningly interesting” and “directly political” people on his podcast so far, most recently including Jenni Byrne, who ran former Conservative prime minister Stephen Harper’s 2015 campaign, and former Liberal adviser Scott Reid, a group he brought together specifically for the 2019 election.

“You’ve got three people who’ve worked on countless campaigns, right at the centre of them,” said Mr. Herle. “As my friend Bill Fox said, three people who are in the room after the meeting is over.”

“Yesterday, we talked for an hour, and that’s not possible on media. I’m not blaming the media for not doing it, I just thought it was a gap,” said Mr. Herle.

His thoughts on the 2019 election? “It feels to me, at the end of the day, it’s coming down to the leadership question, which it often is.”

“Maybe the first question for people is, am I for Trudeau or am I not for Trudeau? And if you’re not, you might go to Singh or Scheer or Blanchet, and if you can’t go to Scheer, it’s likely also because there’s something about him that’s not sitting square with you,” said Mr. Herle.

Justin Ling and Jen Gerson are co-hosts of Canadaland’s OPPO. Mr. Ling, a freelancer with bylines in almost every Canadian paper, and Ms. Gerson, a National Post correspondent turned freelancer, are both fiery personalities. Both independently reached out to Canadaland about doing a show, and Jesse Brown suggested they team up, according to Mr. Ling. Then, on Feb. 5, 2018, OPPO appeared on the airwaves.

Despite hosting a Canadian political podcast, Mr. Ling isn’t a big fan of the ways the medium is used in Canada. That criticism even extends to his own podcast.

“I think Canada, on the politics and current affairs side, hasn’t done a very good job of innovating or changing the format,” he said. “A lot of Canadian podcasts are just adaptations of what we’ve seen Americans do, and I think OPPO is included in that.”

He said he would like to see outlets with larger budgets to “do something different.” He cited another Canadaland podcast, COMMONS,  doing “longform pieces on something you don’t understand about politics” as an example. Mr. Ling, however, said he understands that a lot of “people see it as a risk” especially considering the failure of other large-scale digital media launches in Canada.

“I just don’t see the huge public interest in having two people chat about politics for 45 minutes. We have enough people chatting about politics on CBC News Network for two hours a day,” he said. “I would just challenge everyone in the space to do something slightly different.”

Erica Ifill, who writes a regular column for The Hill Times and is one of three hosts on the Bad + Bitchy podcast, which analyses politics, current events, and pop culture through an intersectional feminist perspective, said that what makes her podcast unique is that “we know our audience, we know who we’re trying to pull in.”

“Pop culture features a lot in our writing and what we do,” said Ms. Ifill. “If you can put those digital and pop culture references in, you get to anchor people in your writing, and you keep people engaged, because it’s always a point of familiarity.”

Ms. Ifill said podcasts appeal to her because the medium provides more leeway to the hosts, and is less filtered than traditional media.

“You know when they say dance like nobody’s watching? That’s literally how I talk,” said Ms. Ifill. “Once you start self-censoring, it’s over. I mean, for me, because I’m coming from a certain perspective.”

Canadian think tanks are entering the podcasting sphere for many of the same reasons as regular media companies. Young people are more digitally inclined, are constantly on the move, and want access to free content on demand. Podcasting checks all of those boxes. 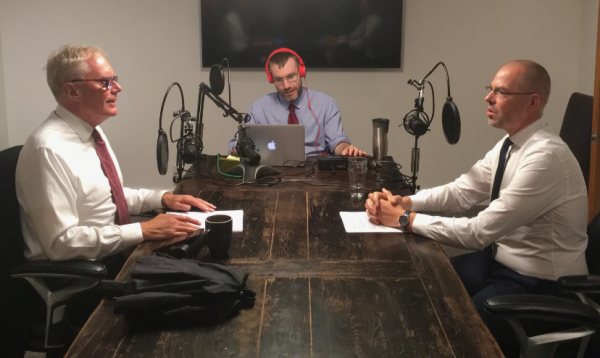 Colin Robertson, vice-president of the Canadian Global Affairs Institute and host of The Global Exchange, said a big part of the reason why American think tanks are so far ahead of their Canadian counterparts in producing digital media products is money.

“American think tanks have their own studios, and we do it pretty simply,” Mr. Robertson said. At first, Mr. Robertson said, The Global Exchange was done “on a shoestring, basically. Mac computer and a couple of headphones.” Mr. Robertson didn’t see lower-quality recording as an impediment to releasing the podcast.

“Don’t worry if the quality is not great, we will improve it over time, it’s better to get it out there,” he said. Mr. Robertson said that approach has worked, because The Global Exchange listenership has been steadily growing, now sitting at around 2,000 listens per episode, and bringing more people to CGAI’s work.

The Brookings Institution’s 2018 annual report, on the other hand, shows an operating revenue of just over $87-million. In fiscal year 2017-18 alone, their four podcasts had over two million downloads. That number reaches above five million downloads when Lawfare podcasts, a Brookings-affiliated online publication focusing on national security and foreign policy, are included.

Brett Byers-Lane, communications director at the Macdonald-Laurier Institute, who also produces and occasionally hosts Pod Bless Canada, said despite the obvious challenges Canadian think tanks face when compared to their American counterparts, there is reason for optimism.

“Canadians are among the more Internet literate people in the developed world. So it makes it would make sense that podcasts [have] a good potential market in Canada and I think that will see them expand over time,” Mr. Byers-Lane said. “So it’s not to say that we’re doing poorly. But I think that once we start getting more organizations and individuals doing regular interesting podcasts on a on a wider range of subjects, we’ll see, I hope, a renaissance in this media form.”

Here are some of the podcasts you can tune into:

CGAI’s vice-president Colin Robertson has hosted the Global Exchange since its creation in June 2016. The first episode was on the aftermath of the Brexit referendum, a topic the podcast has returned to numerous times. The Global Exchange focuses strictly on foreign policy, but CGAI has Defence Deconstructed, focusing on Canadian defence policy, and Battle Rhythm, looking at international security issues.