How warm a welcome?

When Stephen Harper first went to China in 2009, the prime minister received a frosty reception and was famously chastised by Chinese Premier Wen Jiabao for not visiting sooner.

And that was when journalists were still in the room.

A senior official quipped afterwards that the reception was so frosty, icicles nearly formed on the mirrors in the room at the Great Hall of the People.

Trudeau has been critical of the Harper government’s handling of the relationship.

“Over the past government’s mandate, unfortunately, relationships with China were somewhat inconstant. They went from hot to cold depending on the issue, depending on the day, it seemed,” Trudeau said Monday. 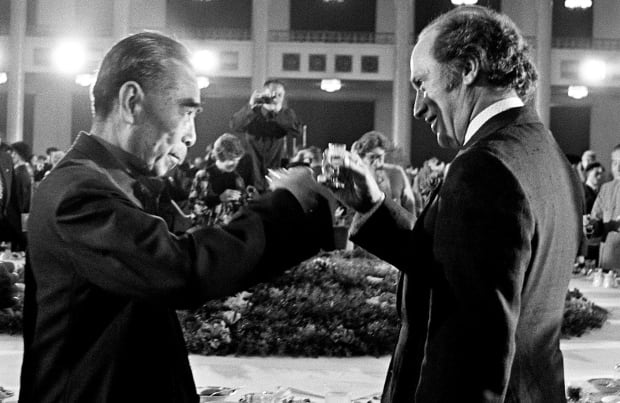 By all accounts, Trudeau should receive a much different welcome.

“The name Trudeau is almost as good as being [revered Canadian doctor Norman] Bethune, because it was, after all, Pierre Trudeau who took the step to recognize China in 1971,” said former diplomat Colin Robertson, who at one point was posted in Hong Kong.

Robertson noted Justin Trudeau and Chinese President Xi Jinping also have something in common: they are both sons of famous fathers.

“So he starts off well past first base, whereas Stephen Harper was still working his way to first base even when he got there.”

Progress on a free trade deal?

As Canada’s biggest trading partner behind the United States, China would like a free trade agreement with Canada.

The previous Conservative government produced studies on the idea that were positive, but not much has been done since.

What will Canada agree to during this visit? Exploratory talks? Or more study?

Robertson said he doesn’t think the Trudeau government has decided yet, and that could be a problem as officials get ready to sit down with the Chinese.

“When you negotiate with the Chinese, despite the tea and buns, they are much more dragon than panda.” 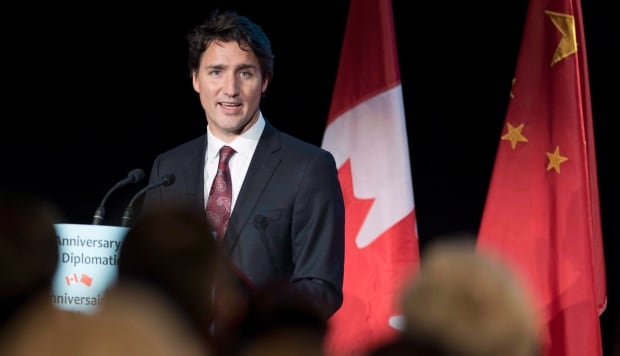 Beyond free trade, China would also like Canada to invest in its $100-billion Asian Infrastructure Investment Bank.

The AIIB was created to support the development of infrastructure in China. Countries that invest in the bank give their country’s firms preferential access to projects funded by the AIIB.

Canadian firms are keen to get a piece of this business and are hoping Trudeau will send a positive signal during this visit, said former Conservative cabinet minister Stockwell Day, now a vice-president with the Canada-China Business Council.

“I think there’s a huge opportunity for Canadian firms; large firms, mid-size firms. We’re very well acquainted with issues related to developing infrastructure in cold weather and in extreme climates. We’ve got so much to offer there,” Day said. 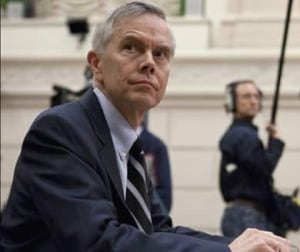 “I actually think we made the right decision in not joining,” said Mulroney, who’s now president of the University of St. Michael’s College in Toronto. “China is, in my view, far from ready for hosting a major multilateral financial institution.

“As they were announcing the launch of the bank they were shutting down the website for Reuters, which is one of the premier financial media outlets in the world.”

Asked about potential investment in the bank, senior Canadian government officials would only say, “We will have more to say on the trip.”

Trudeau has promised to balance economic interests with human rights.

“What we want to do is set a very clear and constructive relationship with China that yes, looks at the potential economic benefits of better trade relationships, while at the same time ensuring that our voice is heard clearly on issues of human rights, of labour rights, of democracy, environmental stewardship,” Trudeau said.

He will get a chance to raise thorny issues like human rights, canola exports and the espionage case of Canadian Kevin Garratt when he meets with the Chinese premier and president Wednesday in Beijing. 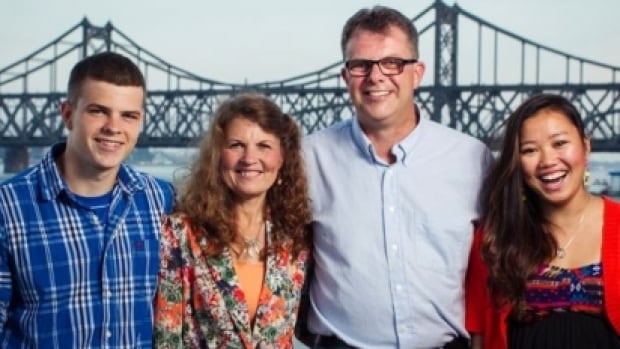 Kevin and Julia Dawn Garratt, flanked by their son Peter and daughter Hannah, were detained in August 2014 near the border with North Korea. They were accused of stealing Chinese military secrets. Julia Garratt was released on bail on Feb. 5, 2015. (Simeon Garratt)

Day accompanied Harper on two of his visits to China, and he has no doubt Trudeau will raise these issues as well, in the appropriate way, behind closed doors.

“You can make headway sitting down around a table, eyeball to eyeball, and without trying to make political points,” Day told CBC.

Mulroney adds the Chinese are very used to foreign leaders raising these issues.

“You want to address it in a non-confrontational way because you want the conversation to continue. And you want to nudge and move the Chinese system into a direction that’s going to be helpful for Canada,” he said.

Canada and the G20

China has promised to ratify the Paris Accord to fight climate change in advance of the G20 summit in Hangzhou, which begins Sept. 4.

There are media reports the U.S. will also sign, with China, two days before the international summit.

Canada has promised to ratify the accord by the end of the year. There have been no such reports it plans to do so in China.

Canadian officials are also expected to talk with European delegations about the Canada-EU free trade deal.

The general advice for Trudeau seems to be to not rush into anything with China, but rather to focus on building a long-term relationship.

Day said both parties have an “assured sense” they’ll be dealing with each other for at least the next several years, “so it gives some opportunity to build some types of relationships and decision-making that can have long-term effects and prosperity for Canadians.”

WATCH ABOVE: Justin Trudeau hopes to reset relations with China on 1st official visit
A A

As Prime Minister Justin Trudeau heads to China on his first official visit, two issues that could be on the agenda as he meets with Chinese president Xi Jinping are human rights and the case of Canadian Kevin Garratt who has been charged with espionage.

Ahead of the official visit, Trudeau said his government would balance strengthening business ties between the two countries with concerns over human rights issues in China.

“What we want to do is set a very clear and constructive relationship with China that yes, looks at the potential economic benefits of better trade relationships, while at the same time ensuring that our voice is heard clearly on issues of human rights, of labour rights, of democracy, environmental stewardship,” Trudeau told reporters last week in Sudbury, Ont.

The Chinese regime has been accused of targeting activists and dissidents, persecuting people for religious beliefs, and using torture. But China’s ambassador to Canada, Luo Zhaohui, made an attempt to quell fears of his government’s troubled human rights record ahead of Trudeau’s trip.

“(In) China, we’ve got a long way to go to improve the human rights situation, but at the same time we have also made a lot of progress in the past many years.”

Who is Kevin Garratt?

Trudeau will also get the chance to speak with Chinese officials about the case of Kevin Garratt – a Canadian man who was charged with spying and stealing Chinese state secrets. Garratt and his wife Julia — who have lived in China for 30 years — were arrested in August 2014 by the state security bureau. Julia Garratt was released on bail in February 2015.

Their son Simeon Garratt, who lives in Vancouver, has previously denied his parents were involved in any wrongdoing.

Former Canadian ambassadors who spoke with Global News said Trudeau could send a strong message just by raising the issue when he sits down with Jingping on Wednesday.

“Just by raising the arrest of Mr. Garratt he flags to the Chinese authorities that this is something the Canadian government puts some priority on. That alone sends the message.” said Colin Robertson, a former diplomat and vice-president with the Canadian Global Affairs Institute.

Gar Pardy, the former head of Canada’s consular services, said in rare cases China has been known to release prisoners based on high-profile representation. Garratt’s case was also raised by the former Conservative government.

Pardy said releasing Garratt would be an “easy” gesture for Chinese officials looking to improving the relationship between the two countries.

“Whether or not they will do it no one can hazard any sort of a definite answer,” Pardy said.

Robertson added that Trudeau will be closely watched by the press on the issues following a visit in Juned from China’s Foreign Minister Wang Yi.

Tension over China’s jailing of the Garratt’s boiled over after Minister Yi publicly berated a Canadian journalist for asking about the case.

“Your question is full of prejudice against China and arrogance … I don’t know where that comes from. This is totally unacceptable,” Minister Yi said through a translator at a joint news conference with Foreign Affairs Minister Stephane Dion.

Dion, who was sharply criticized for staying silent during the incident, has said that both he and Trudeau raised Garratt’s case with Wang and discussed human rights.

Prime Minister Justin Trudeau left on Monday for his first official visit to China, in a bid to better relations between the two countries.

But one sticking point has already been addressed – that of human rights.

“[In] China, we’ve got a long way to go to improve the human rights situation, but at the same time we also made a lot of progress in the past many years,” Chinese ambassador Luo Zhaohui told the Canadian Press wire service in an interview prior to Trudeau’s trip.

The admission could be considered a preemptive strike to ease tensions since Canada has chastised China on its human rights issues many times in the past. Trudeau had promised to revisit the issue during his week-long visit.

But better economic ties between the two countries is the major objective, Canadian media reported.

Next to the United States, China is Canada’s largest trading partner and China would like to negotiate a free-trade agreement with Canada.

It is not always easy to broker deals with China, according to former Canadian diplomat Colin Robertson, who was at one time was posted to China.

“When you negotiate with the Chinese, despite the tea and buns, they are much more dragon than panda,” he told the Canadian Broadcasting Corporation, Canada’s state media.

Relations between the two countries was frosty when Stephen Harper was Canada’s prime minister. Trudeau’s Liberals took over government after winning election in the fall of 2015.

“Over the past government’s mandate, unfortunately, relations with China were somewhat inconstant,” Trudeau told reporters Monday. “They went from hot to cold, depending on the issue, depending on the day, it seemed.”

But Robertson said Trudeau has a better chance of reaching deals with China because the prime minister’s father, who is also a former prime minister of Canada, was one of the first Western leaders to recognize communist China in 1971.

Economics again is slated to dominate the visit.

China also wants Canada to invest in its Asian Infrastructure Investment Bank to the tune of CAN$100 billion.

China is more likely to look favorable on countries that have invested in the bank when it comes to awarding contracts for various projects within China and Canadian businesses are eager for a piece of that, according to the CBC.

On Sunday the G20 Summit in Hangzhou convenes and Trudeau’s stated goal of improving economic ties with China will have a chance to strengthen – leaders are expected to discuss ways to advance global economic co-operation and development, the Globe and Mail, Canada’s largest newspaper, reported.