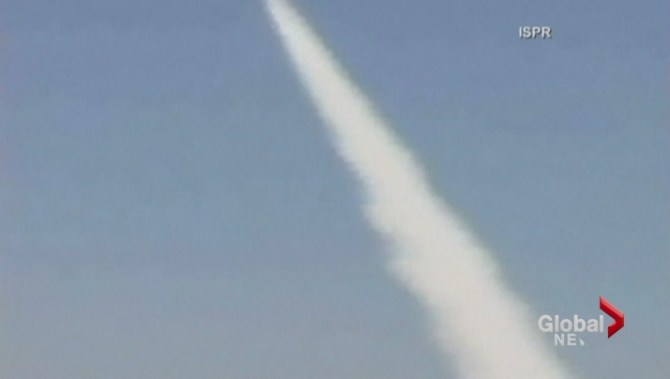 Watch above: Vassy Kapelos explains how the Canadian government is re-visiting the the idea of joining a ballistic missile defence program.

It’s an age-old debate in Canada, and it’s now being quietly re-visited.

For months, the senate committee on national security and defence has been studying the possibility of joining a NATO/U.S.-led ballistic missile defense program.

The last time Ottawa looked at the possibility, in 2005, they opted out, but sources say this time there could be a different outcome.

“You can just get a sense from the questioning that this is something that the government wants to consider,” said NDP defense critic Jack Harris.

Harris questioned the government on the issue during question period on Thursday, asking directly if the government will participate in the U.S. ballistic missile defence program.

Parliamentary Secretary to the Minister of Defence James Bezan responded by noting in the past Canada has declined to participate in ballistic missile defence programs.

“We’ll continue to monitor international developments and also continue to ensure both the safety and security of Canadians both at home and abroad,” Bezan said.

“We’ll have some collaboration and discussions and make a recommendation and report back to the House of Commons,” Bezan said.

So what has prompted another look at ballistic missile defense? With threats from North Korea, Iran and even Russia, proponents say it’s not impossible to imagine a scenario where a missile aimed for the U.S. instead ends up heading towards Canada.

“From a Canadian perspective, the threat has improved such that we are potentially vulnerable, particularly cities like Saskatoon, Edmonton – the cities closer to the border,” said former diplomat Colin Robertson.

Robertson says Canada currently has a seat at the table when allies talk about potential threats.

But, “when it actually comes time to make the decision to launch a missile, unlike the Europeans, Japanese, Australians – we have to leave the room,” Robertson said.

WATCH: Responding to a report from Global News, NDP MP Jack Harris questioned the federal government over it’s willingness to re-enter a NATO- or U.S.-led ballistic missile defence program (May 08)

Critics aren’t convinced there’s a need to join a program.

Steven Staples is President of the Rideau Institute. He argues there’s little proof the missile defense technology even works. “It’s incredibly complicated – what they’re basically trying to do is hit a bullet with a bullet – in space, “Staples said.

Staples also points to cost as an issue; early estimates peg the price of joining a program at $500 million, that could always rise.

In a statement, a spokesperson for Minister of Defense Rob Nicholson told Global News “we look forward to reviewing the report from the Senate committee.”