While he has many foreign policy critics, the prime minister has found his point on Canada’s diplomatic compass From the Ottawa Citizen, Monday, October 17,2011 and in the Hill Times, October 24, 2011

Argue with the taxonomy, but there are essentially three schools in Canadian foreign policy. The first is that designed by Sir John A Macdonald and Sir Wilfrid Laurier: the realist, power-and-interest school that actively participates in an alliance of the like-minded, initially led by Britain and now the United States. The external counterpart to Macdonald’s National Policy, it was followed through to Brian Mulroney, with adjustments for changing circumstances. Mulroney, moreover, was able to do in 1988 what Laurier failed to do in 1911 – exchange tariff protection for free trade.

The second is that of Mackenzie King: nationalist, regional in outlook, and both cautious and skeptical about international entanglements that aren’t reciprocal. This approach also appealed to populist, regional third parties from the Progressives through the Bloc Québécois.

Louis St. Laurent and Mike Pearson personified the third school, further refined by Pierre Trudeau and Jean Chrétien. Like the first school, it is committed to collective security. Assertively multilateral, it embraces international law and institutions, especially the UN. Energetically nationalist, it is ready to tweak the beak of the American eagle to underline Canadian independence.

Pundits and respected former practitioners have criticized Stephen Harper’s foreign policy as polarizing, lacking in strategic coherence and having put us out of the international game. To determine where to situate Stephen Harper’s “enlightened sovereignty,” let’s look at some of its main compass points.

Harper has taken Mulroney’s advice – which he reiterated in a speech at the University of Toronto on Thursday – on handling the United States, our most important relationship, especially his dictum “that we can disagree without being disagreeable” and that we always achieve more when we start with what is on their agenda. Harper also understands Mulroney’s corollary that Canadian influence in the world is measured to a significant degree by the extent to which we are perceived as having real influence in Washington. Harper is betting that the Obama administration can deliver on his initiatives to secure better access by pushing the perimeter beyond our borders and through regulatory reform. 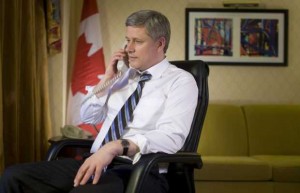 Harper speaks by phone to Obama

Like its predecessors, the Harper government is also actively pursuing opportunities with other partners. Since 2006 it has concluded free-trade agreements with nine countries, including Honduras, Colombia, Peru and Panama and opened the door to closer partnership with Brazil. We are a nation of the Americas and they deserve more attention, beginning with Mexico, our mostly ignored, other NAFTA partner.

Negotiations on expanded trade are underway with close to 50 others, importantly with the European Union, Korea and India. All are incrementally important, especially with the Doha Round of international trade talks on life support. Priority should be placed on gaining a seat within the Trans Pacific Partnership, with its entrée into Asia Pacific.

China was initially, unnecessarily, cold-shouldered. Harper now appreciates that the approach of Trudeau, Mulroney and Chrétien – constant engagement with respect for “face.” With the relationship back on track, a second Harper trip in November should emphasize our people-to-people connections through schooling and migration, as well as our commercial objectives.

Fifty years and a trillion dollars later there is an acknowledgment that the “handout” approach to development isn’t working, especially in the case of Africa. A lead role for business in providing a “hand-up” as a job-generator makes more sense. In arguing for greater “aid effectiveness” Stephen Harper echoes a theme that dates back to Mike Pearson. As co-chair of the UN Commission following up on his G8 Muskoka Initiative on Maternal and Child Health, Harper’s first report provides a new framework for accountability and transparency.

Since the creation of the Jewish homeland, we have consistently, and correctly, stood in Israel’s corner. The Harper government, with support from the Liberals, has sharpened our stand by walking out or boycotting forums that link Zionism and racism.

Wearing the blue beret has considerable romantic appeal but Canadians haven’t led in peacekeeping for a couple of decades. Contemporary circumstances make it unlikely we’ll do so again soon. What is required is a capacity for peacemaking and disaster response. Our experience in Afghanistan has given us the “best little army” in the world with skills that proved adaptable and effective in the relief of Haiti.

The bigger policy question for Canadians, underlined in the Libyan intervention – “responsibility to protect” in all but name – is how far, and how much, should we commit to duties beyond our border that actively involve us in other people’s conflicts with significant risk to the lives of Canadians. As we have learned in Afghanistan and Iraq and are witnessing in the fallout from the Arab Spring, liberal democracy is not an easy transplant.

Few prime ministers have devoted as much attention to northern policy as Harper. A majority of Canadians see Arctic sovereignty as the country’s top foreign-policy priority. He needs to move ahead with the promised icebreakers, actively lead in the Arctic Council stewardship negotiations and remember that we need new frigates to patrol what is now the longest coastline in the world.

The comical Fossil of the Year award notwithstanding, the Harper approach on climate change reflects both Canadian ambivalence on energy and the environment and the complexity of regionalism. When given a choice in the 2008 election, Canadians rejected the Stéphane Dion “green-shift.” Nor has the Green party enjoyed anywhere near the success of its European counterparts. Taxing carbon may be good public policy but, like ending sales of asbestos, abandoning supply marketing, and permitting foreign investment in our resources, governments weigh these decisions against their calculus of national unity.

What is remarkable about Canadian immigration is the continuing public support and our commitment to pluralism, in contrast to the U.S. and European nations. Fixing our lax refugee standards was overdue and necessary to maintain public confidence. We admit a quarter million new settlers a year and, fragile economy notwithstanding, attracting and selection of talent is going to be increasingly critical. Putting the emphasis on the responsibilities of citizenship rather than “rights,” with respect for our history and traditions is both good policy and good politics.

From the outset, Harper put priority on steering our economy through troubled times. Reaping the dividends of the effort to “get government right” that began in the Chrétien years, we’ve brought northern light on private banking, fiscal and monetary management to the global table. It’s a tribute to this ongoing work that Bank of Canada Governor Mark Carney is a serious contender to head the Financial Stability Board, the newest pillar in global economic architecture.

Stephen Harper’s “enlightened sovereignty” fits comfortably within the Macdonald-Laurier tradition, albeit with a sharper and more conservative tone. It views the world as inherently dangerous and prepares accordingly. It is less UN-centric and less ambitious than some would like. It doesn’t always appreciate nuance. It will be more effective when it refurbishes a Foreign Service in which it lacks confidence. But is hardly polarizing. It leans without ambiguity to our traditional values and long-standing allies, beginning with the United States. It is more prudent than progressive. It is more incremental than strategic.

Coherence is fine for classroom discussion but the international chessboard obliges adaptability. Our priority must always be on what serves the national interest. We may not have a seat on the UN Security Council but we play where it counts. Our contribution is acknowledged by those who matter. Five years on, we are still very much in the game.