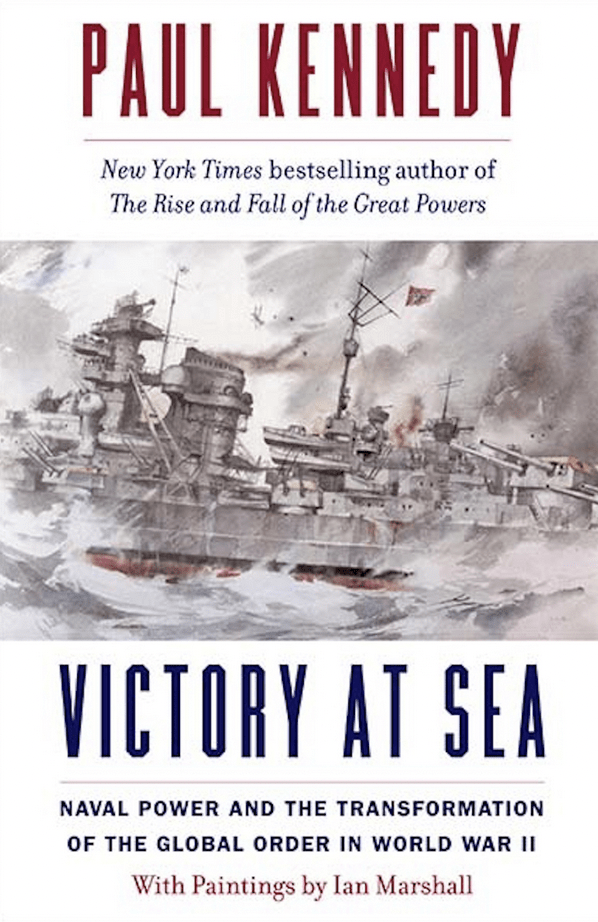 Victory at Sea: Naval Power and the Transformation of the Global Order in World War II

Historian Paul Kennedy’s Victory at Sea: Naval Power and the Transformation of the Global Order in World War II is the story of how the navies of the United States, the United Kingdom, France, Germany, Italy and Japan prepared from the mid-1930s and then fought in the waters of three main theaters: the Mediterranean, the Atlantic and the Indo-Pacific. As Kennedy relates, the European war began with U-boats sinking British warships while the Pacific war would begin with a surprise Japanese assault by air – “The age of modern asymmetric weaponry had arrived.”

The British-born, Oxford-trained Kennedy is currently the J. Richardson Dilworth Professor of History, and Director of International Security Studies at Yale, where he also taught the Grand Strategy seminar with the late diplomat Charles Hill and Gaddis Smith. A prolific author and columnist, he is perhaps best known for his The Rise and Fall of Great Powers: Economic Change and Military Conflict from 1500 to 2000 (1987). It was required reading in foreign ministries. It argued that the challenge for the great powers is to balance their economic capacity with their military power and strategic commitments. Success or failure hinged on decisions around investment, defense and consumption.

Like Rise and Fall (677 pages), Victory at Sea is equally magisterial (544 pages) even if the scope is a decade and a half rather than half a millennium. It tells the story of convoys, amphibious landings and naval battles involving the six great powers and their allies. By war’s end four of them were vanquished.

Victory at Sea is an analysis of power shifts in the international system and a study in the causes of historical change. Kennedy argues that “at no other time in history did the naval balance of power change as much” as during the crucial period covered by the book. It was “the greatest naval war the world had ever seen,” a “deadly struggle between revisionist and status quo Great Powers.” Winston Churchill — notably First Lord of the Admiralty both during the First World War and, more fatefully, again before becoming prime minister in 1940 — was proved right when he opined that if Britain could just withstand the early Axis blows then the entry of America, “that giant boiler”, would be decisive.

Kennedy makes a convincing case that the “transformation of the global order” hinged on the crucial role of naval warfare and America’s superior industrial capacity. The dynamic growth of the United States and its rapid attainment of naval mastery left it the number one world power — the ‘superpower’ — by 1945.

Kennedy’s fluent storytelling is accompanied by statistical charts and detailed maps. The elegiac watercolour paintings of the late Ian Marshall are a visual treat. Look at the 53 plates, beginning with HMS Hood and HMS Barham at harbour (1936) in the Royal Navy’s Malta base (both were later sunk in the Battle of Malta) and including the Allied fleet led by USS Missouri in Tokyo Bay (1945).

Kennedy acknowledges his debt to French scholar Fernand Braudel (who spent time in a German prisoner of war camp) and Braudel’s equally magisterial The Mediterranean and the Mediterranean World in the Age of Philip II (1949). Braudel describes the shift from a Europe centered on the Mediterranean to a continent looking to the Atlantic and beyond. For Kennedy, World War II marks the decisive shift of the Eurocentric world order to one dominated by the United States. Kennedy argues it could not have happened without the navy.

To illustrate the Battle of the Atlantic, the war’s longest campaign. Kennedy tells the story of ONS-5, an Allied merchant convoy returning from British ports in May, 1943 to New York City to receive the vital stocks of food, fuel and manufactured inputs such as steel that kept Britain fed and industry sustained. German U-boat wolf packs were sinking ships faster than they could be replaced. Churchill would write that it was the “only thing that ever really frightened me during the war.” He told the War Cabinet (March, 1943) that the country’s naval resources were “stretched to the uttermost”, and “inadequate to meet the enemy’s concentration of U-boats”.

In a compelling vindication of Churchill’s championing of radar technology, that confrontation off the coast of Newfoundland ended with seven U-boats sunk and another seven damaged because of technological innovation that combined lengthening the radius of aircraft escorts and improved equipment for the detection of submarines: the centimetric radar dish invented at Bell Laboratories that allowed the convoys to ‘see’ the wolf pack. Kennedy writes that “In the entire naval war, it is hard to find a better example of a novel technology immediately making a difference to the fight.” So, of course, did Bletchley Park’s ability to read German naval codes.

‘War was coming,’ Kennedy writes about the 1930s, ‘because two revisionist and authoritarian regimes were no longer willing to tolerate existing borders.’ History does not repeat itself, but as Mark Twain reminds us, it often rhymes.

For Kennedy, 1943 was the pivot year. The Allies turned the tide in the Atlantic. With the arrival of the aircraft carrier USS Essex, the first of its class, and the new Grumman Hellcat fighter jet and fighter-bomber, there were victories in the Pacific. In the Mediterranean, the Allies made landings in Sicily after retaking North Africa.

The Hellcat, writes Kennedy, tells another story of the war: the extraordinary supply chain that stretched from the mining of bauxite — the ore needed to produce aluminum — in the then-Dutch colony of Suriname, to the production of aluminum in Alcoa refineries in Tennessee, to the manufacturing of parts in East Hartford, Connecticut, to the construction of the planes at the massive Grumman factory at Bethpage, Long Island. They were then flown to naval bases in San Diego and Long Beach, California where they found their new home on newly-built Essex-class carriers. Hellcats eventually shot down 5200 enemy aircraft, far more than any Allied fighter.

The Essex carriers and Hellcats symbolized Franklin Roosevelt’s declaration that the USA had become the ‘arsenal of democracy’ in its global dominance. One chart, measuring warship tonnages from 1939 to 1945, essentially tells the story of World War II. While the lines of all the five other powers go up or down slightly as the war progresses, the line for the United States climbs steeply, starting in 1941, in an almost vertical direction. By war’s end, the American shipbuilding program was “almost choking on its own productivity.” American warship tonnage outstripped all the other belligerents put together. The US Navy ruled the waves with almost 100 carriers and hundreds more battleships, destroyers, corvettes and auxiliary ships.

Kennedy cites fellow historian Correlli Barnett, who argues that a nation’s capacity — national direction, strategic decision-making, productive resources, scientific and technological capacity, the armed services and their weapons systems — is determined by conflict because it tests the strengths and weaknesses of their society. A fundamental figure in that audit is naval expenditures, because warships are usually the biggest ticket item in war-making as compared with jets or tanks.

Kennedy gives Canada scant attention even though we played a critical role in the Battle of the Atlantic. Our warships were part of Britain’s lifeline, helping to escort more than 25,000 merchantmen across the Atlantic. Employing more than 125,000 workers, our shipyards built more than 4,000 vessels, each ship in an average of 307 days.

At the end of the Second World War, Canada had the fourth- largest navy in the world with 95,000 sailors and 434 commissioned vessels.

Today, Canada has around 12,000 sailors with twelve frigates and four submarines originally built in the 1980s, a dozen coastal vessels built in the 1990s, and a reconditioned commercial supply ship. The first of our six new offshore patrol ships, HMCS Harry DeWolf, sailed through the North West Passage last fall.

While the Trudeau government has committed more money to defence, at 1.36 percent of GDP our defence expenditures are far below the NATO target of two percent. As we revisit our current defence strategy, we need to ask ourselves: Is this sufficient to secure our sovereignty and ensure collective security?

Fronting on three oceans — the Atlantic, Arctic and Pacific — Canada’s coastline is the world’s longest. We live in an era of increasing threats, higher collective security obligations and, with climate change, the waters we must defend expand daily. We hope to see our 15 new surface combatants in the early 2030s and our two new supply ships in the late 2020s. We also need new submarines.

For Kennedy, the application of sea power, fundamental to projecting geopolitical power, reached its culmination in World War II. It decided the outcome of the transformative struggle between the Grand Alliance and the Axis Powers. Today,  we look to the Indo-Pacific, through which 60 percent of world commerce passes. Sea power is vital to preserving freedom of navigation for our trade.

“War was coming,” Kennedy writes about the 1930s, “because two revisionist and authoritarian regimes were no longer willing to tolerate existing borders.” History does not repeat itself, but as Mark Twain observed, it often rhymes.

Contributing Writer Colin Robertson, a former career foreign service officer, is a Fellow and Senior Adviser at the Canadian Global Affairs Institute in Ottawa. He also serves as an Honorary Captain in the Royal Canadian Navy.