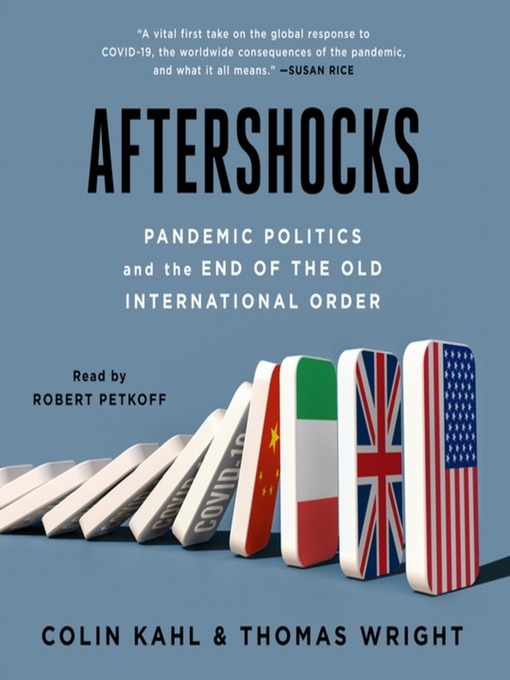 Aftershocks: Pandemic Politics and the End of the Old International Order

By Colin Kahl and Thomas Wright

History on the hoof can be treacherous but Aftershocks: Pandemic Politics and the End of the Old International Order by scholars Colin Kahl and Thomas Wright stands up. What would happen in a global crisis, they ask, if world politics were dominated by national governments that refused, or were unable, to cooperate with one another? Well, we found out and it was a disaster with the global death toll now approaching six million. An intercontinental war is no longer required to accelerate a global contagion.

Aftershock is the story of how our highly interconnected world floundered in what quickly became individual national efforts to cope with a global contagion in an age of gross inequality, rising populism and nationalism, and escalating geopolitical competition especially between the US and China. All of this complicated and ultimately confounded what should have been a coordinated international response.

The authors’ perspective is rooted in history. Indeed, the first chapters of this four- part book are devoted to previous pandemics, especially that of 1918-20 and its effect on world order. The subsequent parts deal with the crisis unleashed by the COVID pandemic, using case studies to illustrate the various disjointed national responses.

Kahl and Wright explore our current world disorder as nations locked down and vaccine nationalism became the order of the day. Illiberal leaders and autocrats took advantage to consolidate power and game elections. Ironically, their efforts to further erode their citizens’ freedoms, and crack down on dissent were aided by new digital technologies, including surveillance apps developed to stop the spread of the virus.

The pandemic has also been characterized by clashes between democratic leaders who wanted to control the outbreak and new world order populists who denied its severity. The net effect, Kahl and Wright argue, has been to reverse decades of poverty reduction in the developing world and erode democracy and civil liberties. The net result, the authors conclude, is probably a fatal blow to our rules-based order.

Kahl and Wright explore our current world disorder as nations locked down and vaccine nationalism became the order of the day.

The final section looks to a post-COVID world, the requirement for pandemic preparedness in vaccines and protective equipment. Kahl and Wright suggest like-minded nations create their own institution but global problems like pandemics and climate change are better addressed through global effort.

Aftershocks is also important because Colin Kahl is now US Under Secretary of Defense for Policy and,as such, principal advisor to the Secretary of Defense for defense policy. Kahl previously served as Deputy National Security Advisor in the Obama administration.  Thomas Wright directs the Center for the United States and Europe at the Brookings Institution. Aftershocks is in many ways a companion to his earlier and excellent All Measures Short of War: The Contest For the 21st Century and the Future of America.

Kahl and Wright argue that the pandemic is an unnecessary and, as we are learning, unfinished tragedy. In the case of the United States, they are scathing in their assessment that “there simply was no excuse for one of the world’s most powerful nations to be ranked the fourteenth-worst among all countries for deaths as a percentage of the population.”

From the time he first heard of the dangers posed by the virus, Donald Trump’s response was to misrepresent the threat and its remedies because it interfered with his re-election bid and his efforts to portray himself as the dealmaker-in-chief of his now stillborn China trade pact.

History may not repeat itself but the lessons of the 1918-20 pandemic and the more recent bouts with SARS, MERS and Ebola that make up the first part of the book should have left the West, including Canada, better prepared. Everyone had known some sort of global pandemic was possible. Some countries had even planned for it, but when it arrived, most leaders “were flying blind”.

Around the world, a “competitive, self-help logic” dominated national responses. Shipments promised to other nations were diverted with “sauve qui peut” as the dominant leitmotif. It was not helped by viral disinformation and conspiracy theories, courtesy of new technologies and willing accomplices, including Big Tech.

The main villain in this story is the Chinese Communist Party, which covered up the virus, failing to share vital data and actively repressing doctors and journalists who tried to alert the public. The reforms inspired by SARS were largely swept aside as the country’s medical authorities were sidelined. Instead, China’s leadership contrasted their success in containing the virus with the West’s incapacity.

Beijing’s disinformation campaign against the West included the claim that the virus came to China from the United States. They also cast doubt on American-made vaccines. Using the offer of pandemic assistance to advance their geopolitical interests in Europe, Africa, and Latin America was another demonstration of the claimed superiority of their governance model.

The main villain in this story is the Chinese Communist Party, which covered up the virus, failing to share vital data and actively repressing doctors and journalists who tried to alert the public.

The World Health Organization has still to determine the origin of the virus but discounting a leak from the Wuhan laboratory would be a mistake. Hopes that China would become a responsible stakeholder in the global order have been dashed by Xi Jinping’s repression policies at home and bullying abroad.

The dupe in this tale is the WHO and its director general Tedros Adhanom Ghebreyesus. In contrast to his predecessor, Gro Bruntdland, who took on the Chinese during SARS, Tedros bent over backwards to appease Chinese sensitivities. But two years later, the WHO has never been able to get what it wanted from Chinese authorities, who continue to obfuscate, deny and deflect. The pandemic demonstrated that the WHO is not fit for purpose and throughout the crisis failed to offer coherent advice on how to contain it.

For Canada, this means a hard-nosed assessment of our interests and capacities. It will require more investment in defence and security. Not just the warships and fighter jets but cyber-security of our hard and soft infrastructure – satellites, grids, pipelines and data. We need reliable and redundant sources for masks, medicines and vaccines. We should look to the German Federal Agency for Technical Relief and its youth corps of volunteers to complement the burden we put on the Canadian Armed Forces.

Aftershocks makes a compelling case that the pandemic marks the end of an American-led international order where the United States and its democratic allies automatically had the upper hand in international institutions. Biden’s best intentions notwithstanding, the old order is not restored simply because Trump is no longer in the White House.

We must prepare for a world in which we are increasingly hit by global shocks against a backdrop of great-power rivalry. The liberal democracies need to pool resources and move on reform of critical organizations like the WHO. We can expect resistance from China and Russia. Nor can we assume that the USA, subsumed with its domestic travails and the China challenge, will lead. Instead, faced with frustrations at home, it may well revert to what Adam Tooze calls “privileged detachment”. The economic and security implications for Canada will be especially profound.

Looking forward, cooperation on transnational challenges, like pandemics and climate, will no longer be insulated from great-power rivalry. The lingering aftershocks of the pandemic will continue to weaken states and regions. We can expect new problems — conflict and disease, displaced people and refugees — that will further fragment the global order.

Since Aftershocks was published, nations came together at COP26 and the World Health Assembly. Both demonstrated that multilateralism is the route to solving the global challenges posed by climate change and pandemics. But they also demonstrate that an accord is not possible without buy-in from the great powers. It underlines why middle powers like Canada need to double-down on quiet diplomacy and being helpful fixer and bridge builder, while avoiding the temptation toward self-righteousness.

Aftershocks is a grim but necessary read. Middle powers such Canada need to take heed and prepare accordingly.