U.S. presidential campaign likely to be ‘ugly or uglier than last time,’ and of ‘deep concern’ to Canadians, say politicos

U.S. President Donald J. Trump, pictured on July 14, 2020, at a press conference in the Rose Garden of the White House. Pollster Nik Nanos says the presidential campaign will be ‘as ugly or uglier than last time because of Donald Trump’s survival instinct.’ Photograph courtesy of the White House Flickr account

With skyrocketing deaths due to COVID-19 in the United States, cases on the rise in that country, and the extension of the Canada-U.S. border closure until Aug. 21, Canadians are paying very close attention to the U.S. political situation as the presidential election campaign heats up, which some pollsters expect to be “uglier than the last time because of Donald Trump’s survival instinct.”

Pollster and president of Ekos Research Frank Graves told The Hill Times that Canadians are extremely tuned in to what’s going on down south, and that the presidential election is “an area of deep concern.”

“It seems to be definitely affecting how we’re looking at things within our own borders, but there’s a high level of anxiety of what’s going on to the south,” said Mr. Graves. “I’ve never seen Canadians so alarmed about what’s going on with our neighbours to the south, and this includes things like the Iraq War, George W. Bush, but nothing even close to the levels of concern that we see right now.” 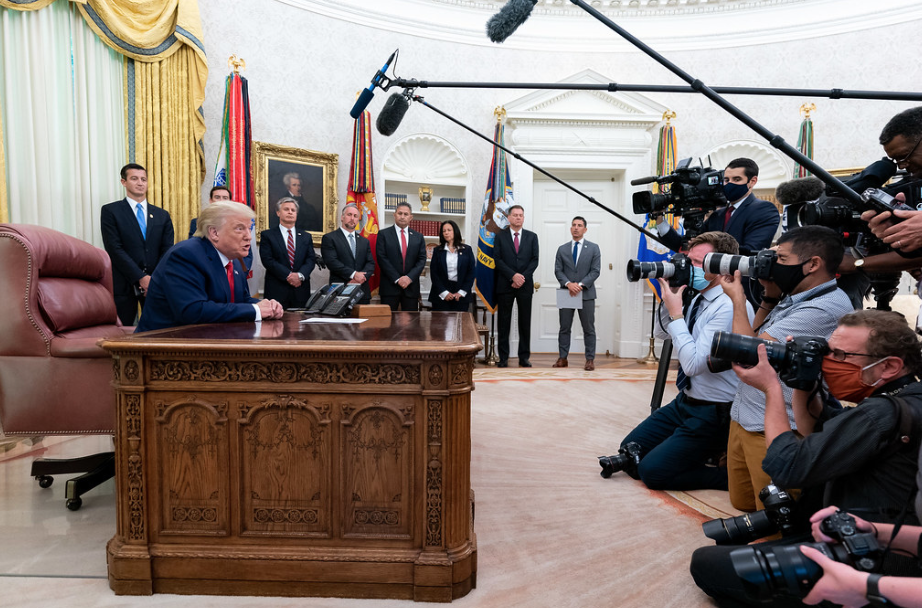 Former prime minister Pierre Trudeau once characterized the relationship between Canada and the United States as “sleeping next to an elephant.”

“It appears that the elephant now has rabies, and that does not make a comfortable bedfellow,” said Mr. Graves. “What to do about it? It really is hard to say—I don’t think most Canadians have any confidence that Donald Trump is going to turn things around,” said Mr. Graves.

“They’re, I think, hoping and waiting for a change in government in November.”

Mr. Nanos of Nanos Research told The Hill Times that the first inclination for Canadian politicians and policy-makers should be to “stay clear” of U.S. politics.

“Right now, we’re in a very volatile situation in the United States because of the rising number of cases, the perceived lack of coordination in the response, the potential recurrence or emergence of a second wave, and from a political perspective, the best thing Canada can do is to stay clear of all of that because you don’t want Canada to be part of the narrative.”

“The best case scenario for Canada is when Americans don’t pay attention to us because that just means everything is working well,” said Mr. Nanos. “To enter into a scrap over the border, for example, basically immerses us into a hyper-partisan context in the United States where people are exceptionally polarized.”

Mr. Nanos said from a political establishment perspective, our federal party leaders should govern themselves in a way for us to stay out of the debate that’s happening in the United States—and “to not get immersed in what’s going to be a very turbulent fall for the presidential election.”

Mr. Nanos said that the presidential campaign will be “as ugly or uglier than last time because of Donald Trump’s survival instinct.”

“I don’t think that he’s going to attack Biden four months before election day—he’s going to look to smear and question the integrity of Biden in the fall,” said Mr. Nanos, who added that polling leading up to an election is a tricky time for campaigns.

“If you’re so far ahead, when the technical correction comes to your true level of support, it’s going to look like your losing support and that your opponents have momentum, when the reality is you’re just artificially ahead right now.”

The worst thing for U.S. Democratic presidential candidate Joe Biden is to show a massive lead against Trump, because the reality is, that’s probably not his true level of support, said Mr. Nanos.

Social media will play a bigger role in this campaign compared to 2016, says Senator Boehm

Independent Senator Peter Boehm (Ontario) said “in Canada, we are always very avid observers of what is happening in the U.S. electoral cycle, whether it’s midterm elections or the big one that’s coming up in November,” said Sen. Boehm.

“When I was posted in Washington, during the Gore versus Bush election, the one that was won by the hanging chad and eventually went to the Supreme Court, there’s always drama in U.S. elections in a way that we don’t seem to have by comparison,” said Sen Boehm. “There will be a lot of observation, and I think at the political level, a lot of attention not to be seen as favouring one candidate over another, just like the last time,” said Sen. Boehm.

Sen. Boehm also said he thinks social media, which Mr. Trump makes considerable use of, will play a bigger role in the campaign than it did in 2016.

“It was prevalent in 2016, and Twitter is obviously a tool that President Trump uses, and uses to his advantage, but I would say there’s always nastiness in political campaigns, but I would say that the real nastiness will be seen on social media,” said Sen. Boehm. “That’s, frankly, where it could get dangerous because you have an unprecedented situation with the pandemic, you have the racism issue which is significant, and you have some global geopolitical issues that are more prevalent than they were before—I’m speaking obviously of China, in this instance.”

Former diplomat Colin Robertson, with more than 30 years in Canada’s foreign service, told The Hill Times “we’ve never had a president like him.”

“And that’s acknowledged globally, and in normal circumstances, our entrée into the United States system is through the office of the presidency and administration,” said Mr. Robertson.

“With Trump, we’ve had to work around dealing as best as we can with secretaries, who come and go with remarkable rapidity, but that has proven to be useful and necessary, particularly during the negotiation of the Canada-U.S.-Mexico agreement,” said Mr. Robertson.

“There’s always a balance that you need to project on the Canada-U.S. file—on the one hand, historically, it’s always been important not to be seen to be too close to the United States. On the other hand, Canadians intuitively know they have important interests tied up, especially economic interests, many family ties, they like traveling there and going there freely,” said Mr. Manley.

When asked to predict the tenor of Mr. Trump’s campaign against Democratic nominee and former vice-president Mr. Biden, Mr. Manley said he “doesn’t think a leopard changes its spots.”

“I look at him as somebody who is incapable what’s true and what isn’t,” said Mr. Manley. “He just makes stuff up, and he defines a reality according to his own purposes, so I think he’ll continue to do that.”

“The way I see the election playing out, is that I don’t think he wins over anybody to his side that isn’t already with him, so I think it all becomes a question of who shows up to vote,” said Mr. Manley. “For the Democrats, the good thing is that Donald Trump really motivates their base.”