OTTAWA — Former prime minister Stephen Harper is planning a trip to the White House next week, and hasn’t notified the current Canadian government of his visit, CTV News has learned.

According to emails obtained by CTV News, American officials are expecting Harper to visit D.C. on July 2, the day after Canada’s retaliatory tariffs on imports of U.S. goods and American-made steel and aluminum are set to come into effect.

It is unclear what the purpose of Harper’s visit is, and how long it has been in the works, but officials say he is planning to meet with American National Security Adviser John Bolton, who was the U.S. ambassador to the UN when Harper was prime minister. It is possible that Harper could also be meeting with Larry Kudlow, Trump’s economic adviser.

In planning his visit, the former prime minister has effectively blindsided the current Canadian government, bucking convention by not notifying Prime Minister Justin Trudeau or his office about the visit. Harper also did not reach out to the Canadian embassy in D.C., Global Affairs Canada, or the Privy Council Office.

Canadian officials only learned about the expected visit after Bolton’s office contacted the Canadian embassy in Washington to inquire about who would be coming with the prime minister to the meeting.

The unanticipated Trudeau visit was news to them, so the embassy contacted the PMO.

Eventually, U.S. officials realized it was a case of confused identity and they were actually expecting the former prime minister, Harper.

CTV News has reached out to Harper’s office for comment, but has not received an answer, leaving uncertainty about whether the visit will actually happen.

Neither the White House nor Bolton’s office is commenting at this time, and sources close to the former prime minister say Harper currently has no trip confirmed, though he is said to be pursuing meetings in D.C.

The sources pointed to the former prime minister’s travel related to his work as Chair of the International Democrat Union (ID), or on behalf of the Friends of Israel, which Bolton is part of.

A series of tweets from Harper Thursday show him meeting with international leaders in Europe related to his work with the IDU, including the Aga Khan. In one, Harper said: “I appreciate all the interest in the #IDU this week, and as IDU Chairman I look forward to continuing to engage with conservatives globally wherever I travel.” 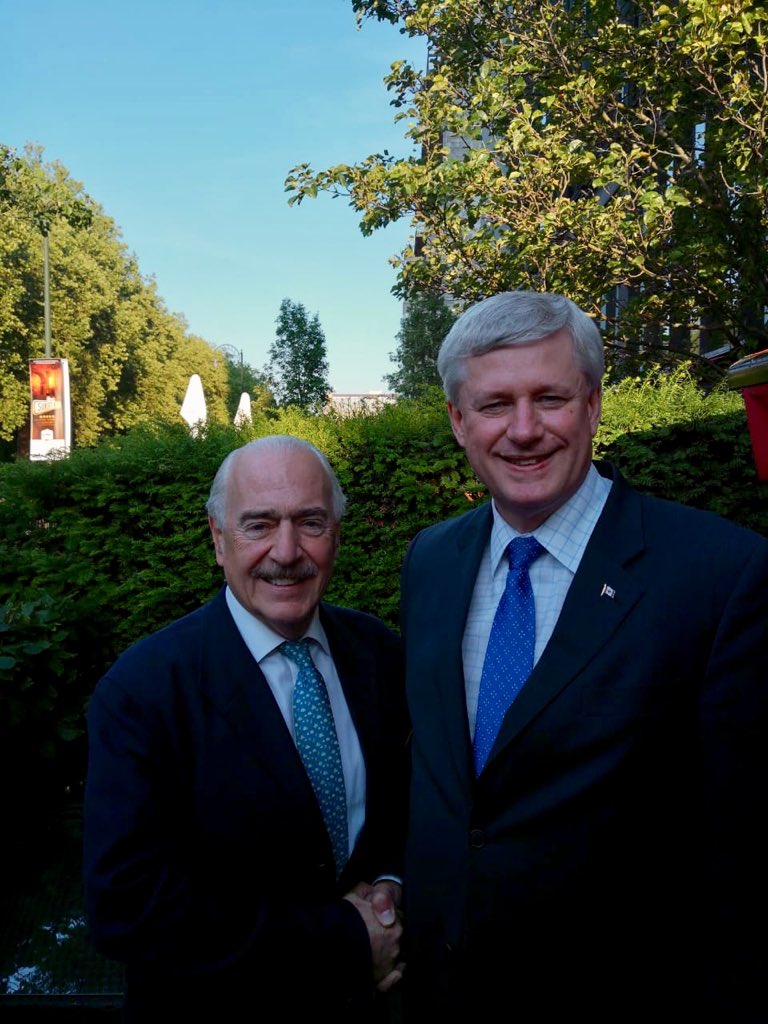 Thank you to President Pastrana for his invitation to join @CDI_IDC meetings in Brussels today. I appreciate all the interest in the #IDU this week, and as IDU Chairman I look forward to continuing to engage with conservatives globally wherever I travel.

Former Canadian diplomat and vice president of the Canadian Global Affairs Institute Colin Robertson said that if the trip is to happen it would be courteous given the state of relations, to notify the current administration. He said the convention among past prime ministers who make trips to meet cabinet-level U.S. officials, is to at least alert the Canadian ambassador to the U.S.

Though, Robertson said he suspects that like other past leaders, Harper would inform the current Liberal government about any intel gleaned from his meetings related to the state of the relationship, regardless of their political differences.

This move comes amid heightened tensions in the Canada-U.S. relationship with the prospect of a full-blown trade war on the horizon, including new tariffs on autos. U.S. President Donald Trump and his officials have also engaged in personal attacks on Trudeau via televised appearances and social media.

After avoiding the spotlight in the months after his defeat in the 2015 federal election, Harper has made a return to the international scene. He got international headlines in the last year over his comments about the Canada-U.S. relationship and the American administration, some of which have been in stark contrast with the current Canadian government’s policy, while other times he’s defended Canada’s position.

In October, The Canadian Press reported on a leaked memo from the former prime minister to clients of his firm Harper & Associates. In the memo, titled “Napping on NAFTA,” Harper criticized Trudeau’s approach after returning from a trip to D.C.

Then in May he raised eyebrows for being among several former international leaders and diplomats to co-sign a full-page advertisement in the New York Times hailing Trump’s decision to pull out of the Iran nuclear deal.

At that time, Defence Minister Harjit Sajjan described Harper weighing in publicly as “not helpful.”

In an interview on CTV’s Power Play, Sajjan said that in his view, Canada should be speaking with one voice when it comes to U.S. policy, citing the ongoing NAFTA talks. His take was a departure from the message track of Trudeau and Foreign Affairs Minister Chrystia Freeland, who said as a private citizen Harper was entitled to his opinion.

Earlier this month, Harper appeared on Fox News where he weighed in on the state of NAFTA talks. He said he understood Trump’s position, but also highlighted the American trade surplus, saying Canada was the wrong target for a trade fight.

On Wednesday, he was speaking at a Five Eyes panel discussion in London, U.K., where he said he thinks Trump’s “America First” policy will outlast the president’s tenure and that the “rapid, unorthodox, populist political change” will be part of the American fabric after Trump leaves office.