Justin Trudeau rolling out the Liberal red carpet for Mexico and U.S. presidents 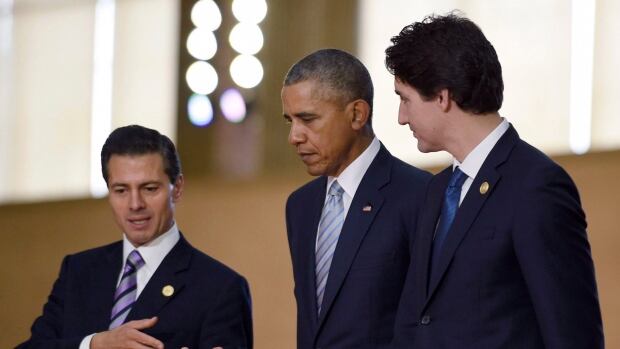 Chris Hall is the CBC’s National Affairs Editor and host of The House on CBC Radio, based in the Parliamentary Bureau in Ottawa. He began his reporting career with the Ottawa Citizen, before moving to CBC Radio in 1992, where he worked as a national radio reporter in Toronto, Halifax and St. John’s. He returned to Ottawa and the Hill in 1998.

Justin Trudeau came to office promising to restore Canada’s relations with its North American neighbours. If dinner and speaking invitations are your measure well, then he’s off to a great start.

Trudeau will play host in the final week of June to U.S. President Barack Obama and Mexico’s Enrique Pena Nieto at the first gathering of the so-called Three Amigos to be held in Canada in nearly a decade.

This shouldn’t be a big deal. It’s Canada’s turn after all.

But the leaders were supposed to have gathered here last year. Instead, former prime minister Stephen Harper postponed the summit amid disputes with the U.S. over the now-rejected Keystone XL pipeline, and with Mexico over his government’s decision to require all Mexicans to have a visa to travel to Canada.

Harper knew there was no recipe for success if the summit went ahead.

Pena Nieto, in particular, already cancelled a 2015 visit with a delegation of business leaders in protest against the visa requirement. It was unlikely he would even have come if invited. But he is now, in large part because Trudeau has promised to lift the requirement.

Dinner and a speech

And the summit isn’t really the main political event when the three leaders arrive in Ottawa next month.

The prime minister has also invited Obama to address Parliament, an invitation he extended when the president feted him in Washington two months ago.

And, not to play favorites, Pena Nieto will be in Ottawa ahead of the summit for a state visit of his own. It includes a formal dinner hosted by the prime minister at the National Gallery of Canada where a special exhibit of Mexican art is planned.

So. A summit. An address to Parliament. A gala dinner.  Amigos de nuevo. Friends again. Even if friendship only goes so far in politics.

The real measure of the relationship, as always, is what gets done.

“I think they need to make a new commitment to North America,”  Laura Dawson, director of the Canada Institute at the Woodrow Wilson Centre in Washington, DC, said Wednesday on the podcast edition of CBC Radio’s The House.

“If you listen to any of the U.S. election coverage right now: North American trade. Immigration. Canada. Mexico. These are all dirty words in the campaign.”

Just listen to Donald Trump. He’ll build a wall between the U.S. and Mexico, and make the Mexicans pay for it if elected president. He’ll rip up NAFTA.

It’s the kind of rhetoric that grabs headlines and dominates political talk shows. Breaking through with discussions of harmonizing regulations or reducing trade barriers are hardly the tools to do it.

“Trump is going to be the elephant in the room,” says former Canadian diplomat Colin Robertson.

“Part of what this exercise is going to be about at the end of June, is to shore up and provide insulation for both the Canadians and Mexicans against what might come, and to take full advantage of Obama’s desire for a legacy which includes North America.” 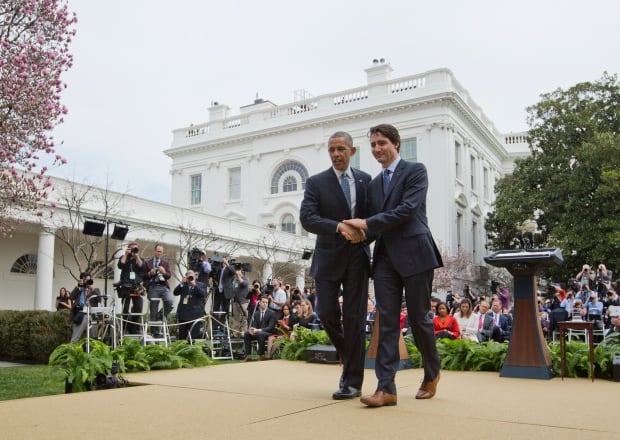 U.S. President Barack Obama, left, and Prime Minister Justin shake hands following the conclusion of a joint news conference March 10 at the White House. The two leaders asked officials to report back within 100 days on how to address the softwood lumber issue. (Pablo Martinez Monsivais/Associated Press)

Obama, no doubt, will say all the right things in his Parliamentary address about Trudeau’s shared commitment to address climate change. He’ll pledge to continue to work cooperatively on border security and harmonizing government regulations. But there’s no escaping that his time in office is rapidly running out. His ability to get any new initiatives through Congress, may already have.

For example, softwood lumber. Obama and Trudeau gave their senior trade officials until June 12 to work out a way to prevent another trade war over softwood lumber. Sources say a solution is unlikely.

“One of the things any U.S. president and Canadian PM will always agree on is the need to create economic growth and prosperity for our citizens,” he told reporters on Wednesday. “We all know that trade is an important part of creating that.”

Fair enough, but both Robertson and Dawson believe the real opportunities in June rest with Mexico, at least in the short-term as Americans choose a new president.

The first step is to address the visa requirement imposed in 2009 by the Harper government after a spike in refugee claimants arriving from Mexico.

That will take time. As an interim, Dawson expects Canada to accept Mexican travellers who hold a U.S. visa, and for Canada to include Mexico among the first countries to qualify for the Electronic Travel Authorization introduced in March for visa-exempt travellers arriving in Canada.

But Robertson says there’s much more that can be done without the U.S..

“We should go and recruit 500,000 Mexican students to Canadian universities. Mexico has a middle-class population of 40 million. They’ve got students looking for places. Why not bring them to Canada? We’ve got university capacity. That would make a profound difference in the Canada/Mexico relationship.”

It’s one of a number of measures where progress can be made in the North American relationship, especially when the biggest of the Three Amigos is pre-occupied at home.

Return of the Three Amigo

Then, after more than two and a half years, the leaders of Canada, the U.S. and Mexico will convene next month in Ottawa for a summit.

So what does the return of the Three Amigos mean for the state of the North American relationship?

“I think this is a new commitment from Canada to the whole North American project.”

Former Canadian diplomat Colin Robertson agrees, telling Chris Hall the upcoming summit is a signal that Canada is back in the game in North America.

“We’ve been a dog in the manger on the North American side — it’s been really Mexico and the United States, and we’ve been sor tof an unwilling partner,” Robertson says.

“Certainly the Mexicans see in Mr. Trudeau someone who understands the broad concept of the Americas, but now we have to deliver and that’s what [the meeting] is all about.”

Both Dawson and Robertson share their insights into the trilateral relationship and their hopes for what the summit will achieve, including a North American climate framework and a boost to Canada-Mexico relations — no matter who occupies the Oval Office after the U.S. presidential election.

“We need to encourage Canada and Mexico to align together on many, many more issues,” Dawson says. “Canada and Mexico have not had a united front. Canadians and Mexicans need to speak much more about what their common objectives are in North America.”