The Republican Establishment dismisses Trump—until it endorses him. Can he take hold of the party?

Hillary Clinton is edging closer to breaking the great presidential glass ceiling, gaining critical delegates on Super Tuesday in her quest to become the Democratic Party’s first female nominee. But most eyes remain riveted on the Republican race. Donald Trump, the populist, so-called “outsider” candidate, roared closer to the Republican nomination with seven big wins on Super Tuesday—and now has the momentum to lock up the nomination. During Trump’s rambling victory speech, one-time competitor and current supporter Chris Christie stood behind him, looking lost in a political Twilight Zone, his dazed face mirroring America’s confusion. Is Donald Trump really about to win?

But still, it’s not over. Neither Ted Cruz, who won three states, nor Marco Rubio, who won one, are going away. Rubio was badly mauled on Super Tuesday and most expect him to eventually drop out. But maybe he watched Leonardo DiCaprio fight the bear in The Revenant or maybe, like so many other Republicans, he is blinded by a toxic loathing for Trump, because he insists he will remain in the race until the convention. 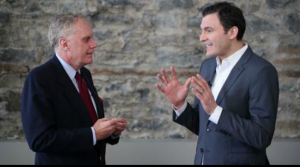 Trump, though divisive, is driving huge interest in the race and huge voting numbers. Now the question is: Will he end up shattering the Republican Party?

To get a read on the most unpredictable, vexatious political race in generations, and to find out if Trump is on his way to victory, Evan Solomon spoke to Colin Robertson, a former diplomat who served in the United States and is now the vice-president of the Canadian Global Affairs Institute.