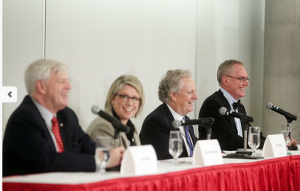 What does Canada want during the last two years of the Obama administration and what we can reasonably expect to achieve?

Colin Robertson, Vice-President of the Canadian Defence and Foreign Affairs Institute and a former diplomat posted to New York, Los Angeles and Washington, moderated the discussion.

More than 160 Members of Parliament, Senators, staffers, senior government officials from PMO, PCO, DFATD, NRCan, Agriculture and Agri-food, Industry and Transport Canada registered along with Ambassadors, High Commissioners and other diplomats, business and non-governmental organizations plus students and faculty.

CPAC taped the panel for broadcast at a later date.

A power point presentation is available here from Colin Robertson, Vice-President of the Canadian Defence and Foreign Affairs Institute.

A summer of the discussion from Carleton student note-takers is available here.

Former Quebec premier Jean Charest says that Canada’s visas for Mexicans make no sense; Mexico is our partner country and we should remove them right away. John Manley, head of the Canadian Council of Chief Executives, agrees but thinks that accepting Mexicans with American visas is a way to lift the visas without actually lifting them. Mr. Charest thinks the United States-European Union free trade agreement will go through because both players want to set the terms of trade rather then let growing powers like China set them. Mr. Manley predicts softwood lumber will explode again in the fall of 2015 and supply management is at the top of the hit list for the TPP negotiations.

All these hot trade talking points and more were batted around on Nov. 25 at Carleton University where a panel of experts came together to talk about the Canada-US relationship during US President Barack Obama‘s last two years. The event was hosted by Maureen Boyd, director of Carleton University’s Initiative for Parliamentary and Diplomatic Engagement, and before things kicked off panelists set out the deals negotiated in the past by Canada and lame-duck US administrations. These deals included the Canada-US Free Trade Agreement, which was negotiated during the final two years of the Reagan administration, as well as the Acid Rain Agreement and the NAFTA, which were achieved in the final two years of the George H.W. Bush administration.

None of the panellists, Mr. Charest, Mr. Manley, Canadian American Business Council senior adviser Scotty Greenwood and Canadian Defence and Foreign Affairs Institute vice-president Colin Robertson, had high hopes that the Obama/Harper relationship would bear any such fruit. But they felt that provinces and states could still get a lot done in the next few years.