Pre-clearance, pre-inspection already exists at Peace Bridge in Fort Erie and at airports 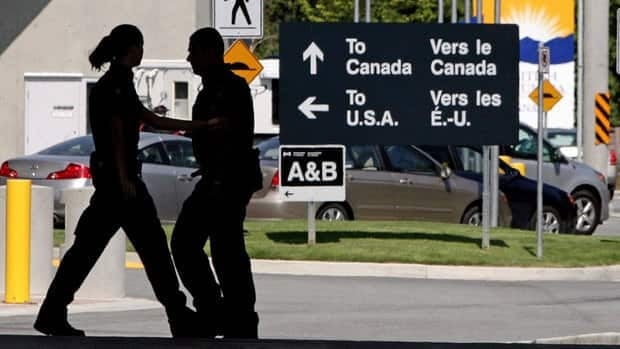 The idea of a customs plaza on just one side of a new international bridge to be built between Windsor, Ont., and Detroit has been suggested, although the U.S. has yet to commit $250 million to its own plaza.

(Note: CBC does not endorse and is not responsible for the content of external links.)

The idea of a single mulitmillion-dollar customs plaza built on one side of the new international bridge that will connect Windsor, Ont., and Detroit has been floated and is getting support from border experts.

Two years ago, Canada and the U.S. agreed on a new crossing to be built over the Detroit River and paid for by Canada. However, Canada expected the U.S. to build its own $250-million customs plaza in Michigan.

While Canada has moved ahead on the project, building a $1.6-billion, four-lane highway leading up to the site of the proposed bridge and acquiring land in Michigan, the U.S. has yet to announce funding for a plaza.

Canadian officials had hoped U.S. President Barack Obama would have earmarked money for the project in his federal budget last month. He didn’t.

‘Why don’t we just have one plaza?’– Colin Robertson of Canadian Defence and Foreign Affairs Institute

On Tuesday, Colin Robertson, a former Canadian diplomat and current vice-president at the Canadian Defence and Foreign Affairs Institute, suggested the answer may be one customs plaza to serve both countries.

“If we’re thinking outside the box and more innovatively, and how we can save taxpayers money, why don’t we just have one plaza?” Robertson asked.

One of Canada’s leading border experts says the idea is “intriguing.”

“I think it’s an interesting idea. It’s consistent with the new spirit of co-operation on border issues between the U.S. and Canada,” said Bill Anderson, Ontario research chair in cross-border transportation policy at the University of Windsor.

Two years ago, the Canada-U.S. Ship Rider Program was unveiled. The joint program underway in the Windsor-Detroit area allows law enforcement officers from Canada and the U.S. to ride together on the Detroit River, patrolling and chasing down criminals on both sides of the international boundary.

That joint initiative between the RCMP and U.S. Coast Guard essentially eliminates the imaginary border on the Detroit River and Great Lakes.

Meanwhile, at Pearson International Airport, for the majority of U.S. flights, guests leaving Toronto go through U.S. customs in Toronto, which allows them to arrive in the U.S. as a domestic passenger. 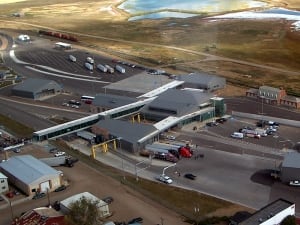 On the ground, a shared customs complex, also known as a shared port of entry, exists in in Alberta at the Coutts-Sweetgrass land crossing.

“Pre-inspection is an important component of ongoing efforts to advance several important projects at the Peace Bridge, all of which will lead to a more functional and efficient border crossing,” PBA vice-chairman Sam Hoyt said.

Trucker Robert Thorne, who was filling up in Windsor, Ont., on Friday said he likes the pre-inspection in Fort Erie and that it speeds up the customs process.

“They should have that at all of them,” Thorne said.

He doesn’t support one common customs plaza though.

“They should leave one on each because it would make too much congestion with just one,” Thorne said.

A spokesperson Canadian Trucking Association told CBC Windsor the association had “no comment during such an embryonic stage.”

The move in Fort Erie was made because of “available staging space” on the Canadian side of the peace bridge, according to the authority’s website.

The Canada Border Services Agency said it does do not operate in any co-located facilities at bridge crossings.

“The CBSA engages in regular discussions with partners to ensure that new CBSA facilities are a pillar of modern border management that meet the needs of both the Government of Canada and the local communities in which they are situated,” CBSA spokesperson Esme Bailey wrote in an email to CBC Windsor. “As construction of the New International Trade Crossing is a number of years away, no final designs or plans are yet in place for this facility.”

‘This is the best opportunity’

Anderson said Windsor has “a great deal of land of the Canadian side” of the proposed bridge.

“If you were going to do something like this, this is the best opportunity to ever come along to do it,” Anderson said.

Robertson said a single plaza would be “probably on the Canadian side.”

Anderson called the single plaza “difficult,” but “not necessarily insurmountable.”

He questioned “what’s legal to do in Canada versus the United States?” 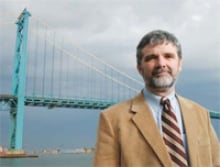 “You’re going to either have CBSA officers on the U.S. side imposing their own laws, or the other way around,” he said. “What happens if you have the plaza in Canada and you have an American officer that wants to arrest somebody and bring them to the United States?”

Even Robertson said some issues would have to be ironed out, including U.S. borders guards carrying guns in Canada.

There were similar questions surrounding the Ship Rider program, but they were answered.

If a chase on the water leaves Canada and enters the U.S., the American law kicks in, but the Canadian officers would have arresting authority on the U.S. side of the river.

The RCMP said Canadian and U.S. officers have the authority to go ashore on each other’s country if they deem it necessary.

Windsor West NDP MP Brian Masse, the party’s border critic, said a single plaza “sounds simple, but it actually is very complicated. It has been done in other areas. There’s actually joint border crossings across Canada and the United States, but this is very unique because of the volumes that we have and the types of things that we have going back and forth.”

In 2010, it was reported that 28,814 trucks crossed the privately owned Ambassador Bridge on a daily basis. 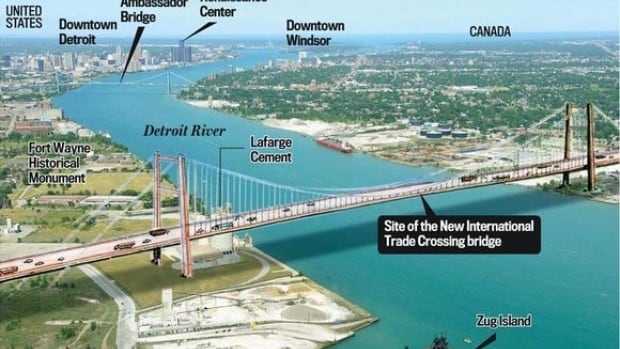 U.S. President Barack Obama did not put money in his federal budget proposal for a customs plaza on the Detroit side of the planned bridge between the city and Canada, shown above. (File Photo)

The new crossing has been called “critical” by both Transport Minister Lisa Raitt and new U.S. Ambassador to Canada Bruce Heyman.

“Right there in Windsor, you have a signature automotive manufacturing capability and a transition of goods across the border. How do we keep enhancing that?” Heyman said.

“That might be something that would appeal to and Heyman could really champion,” Robertson said of the single customs plaza. “In the nuts and bolts of the relationship [between Canada and the U.S.] the ambassador plays a critical role.”

Anderson said the single plaza should be built for the right reasons, though.

“I would hate to see it done because there isn’t money to build the American plaza. I think it should be done because it’s a good way to operate the border,” he said. “Ultimately, I think the Americans should be expected to build a plaza on their side.”