November 3 2010: Powerplay with Janis Mackey Frayer interviews Colin Robertson a former diplomat says the shift in the U.S. was due solely on the economy. When there are not enough jobs the people will vote out the incumbent party, which is what happened to the Democrats. 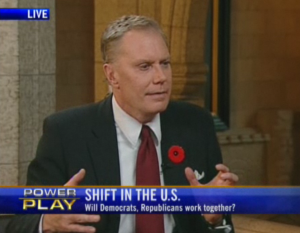 From Barbara Yaffe, ‘Bad news for Obama might not be so bad for Canada’ in the Vancouver Sun:

The Democratic defeat will have come as no surprise to the Harper government or any other America-watchers.

“Americans are sick and tired and scared about the direction of the country, about debt and deficit and about terrorism,” former diplomat Colin Robertson said this week.

Robertson, who has done stints in Canada’s Washington, D.C. embassy and the Los Angeles consulate, pointed out that polls had shown “60 per cent feel the country is headed in the wrong direction … [and] want a smaller government, lower taxes and fewer services.”

What was bad news for Barack Obama, however, might not be so for Canadians.

On the two pre-eminent bilateral issues of trade and energy, Republicans generally are kinder than Democrats to the interests of their biggest trading partner and energy supplier.

Republicans bill themselves as champions of free trade and may be less apt to build “Buy American” provisions into new U.S. legislation.