The Revenge of Power: How Democracies Can Beat Autocracy 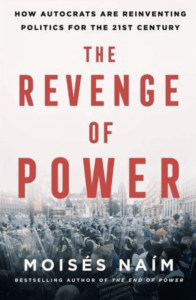 The Revenge of Power: How Autocrats Are Reinventing Politics for the 21st Century

For perceptive insights into what fuels contemporary authoritarians and their relationship with populism, read Moisés Naím’s The Revenge of Power: How Autocrats are Reinventing Politics for the 21st Century. The book is divided into two parts: the first chapters describe the “global war on checks and balances” and how, through the abuse of our electoral process, a new breed of autocrats is corroding the checks and balances provided by legislatures and the judiciary. At the same time, they are curbing the independent media. The net result is the systematic corruption of democratic institutions, including in the world’s flagship democracy, as seen in the riveting testimony and film footage from the congressional hearings into the violent January 6, 2020 attempt to prevent president Joe Biden from taking office.

As the seven chapters in the second part of the book portray, the net result is a “world made safe for autocracy”. In the concluding chapters, Naím offers some pithy advice on how to fight back to save democracy.

The “how” of the 3P power – how it arises, how it operates, how it corrupts both formal institutions and informal norms makes up the bulk of the book, backed up by examples and references.

The Pew Foundation has long tracked the decline in trust in US political institutions. A recent ABACUS poll (2022)reveals that 52 precent of Canadians surveyed say “official government accounts of events can’t be trusted.” Equally troubling, 44 precent believe that “much of the information we receive from news organizations is false.” In tracking the pandemic, EKOS has created a disinformation index (2022) that shows Canadians are also susceptible to mis/disinformation. It had a significant impact on vaccination acceptance. It is wrong to smugly assume that Americans and Canadians are immune from populism, polarization and post-truth.

For Naím, the common link among the new breed of autocrats is their embrace of populism, but it is a mistake to think populism is an ideology. Rather, writes Naím, populism is a “technique for seeking power that is compatible with a nearly limitless range of specific ideologies.” In that sense, populism’s adaptability is its strength. It is easily deployable whenever “resentment against the elite can be mobilized … especially in the many countries where economic inequality has spiked.”

Polarization, says Naím, flows naturally from populism. Polarization also sweeps away the middle ground between political rivals. By amplifying and exploiting discord, the chances of compromise are reduced and portrayed as betrayal. Once the divide between the “noble people” and the “corrupt elite” is the focus of political life, the populists utilize all the tools at their disposal – social media and daily press conferences – to advance their version of ‘post-truth’, all the while presenting themselves as the peoples’ tribune.

As the peoples’ representative in the fight against the elite, it is the leader’s prerogative to decide which views define membership in the true citizenry. This is why, writes Naím, so many populist leaders manage to extract from their followers unconditional loyalty despite contradictions with ideas they may have espoused the day before. For populists, feelings trump facts.

Naím compares the populist’s followers to sports fans who put their emotional identification with their team at the center of their sense of being. When one’s identity, writes Naím, is built on identification with a leader, any criticism of that leader feels like a personal attack on oneself.

The autocrat’s job is made easier, says Naím, by another phenomenon of contemporary democracy – the concentration of power in the executive branch, whether for presidents or prime ministers – a function of the growing complexity of government and leaders’ astute use of technology and communications.

Social media gives leaders unfiltered access to the public. The verification checks provided by traditional media have limited application. A lie, as Jonathan Swift observed, is halfway around the world before truth has its boots on.

Polarization, says Naím, flows naturally from populism. Polarization also sweeps away the middle ground between political rivals. By amplifying and exploiting discord, the chances of compromise are reduced and portrayed as betrayal.

Globalization grew GDP in most nations but fairness did not enter into its rewards. While the elites flourished, the poor got poorer and there was a hollowing out of the middle class. The public lost faith and confidence in traditional institutions, including government, the church, business and labour unions.

In contrast with traditional liberalism, which focused on job creation and economic growth, then distributing the benefits and burdens of social cooperation so as to create a fairer society, the new progressive elite emphasized a hurried-up redistribution based on identity, gender and race. They and their policies became easy targets for populists who promised to defend the left-out. The net result, says Naím, is that liberal democracies face a crisis that compares with the rise of fascism across Europe in the 1930s.

Naím writes with a poet’s panache in describing the “implacable new enemy”: “The foe has no army, no navy, it comes from no country we can point to on a map. It is everywhere and nowhere, because it is not there but in here. Rather than threatening societies with destruction from without, like the Nazis and Soviets once did, this foe threatens them from within.”

Naím warns that these new populists are taking power through democratic elections, then jettisoning, preferably through guile and artifice but, when necessary, through force, the legislative, judicial and media restraints on their positions.

Against this discouraging backdrop, Naím warns that, while there is no silver bullet, democrats must fight back. This means winning five concurrent battles against: the “Big Lie”; criminalized governments; autocracies that undermine democracies; political cartels that stifle competition; and illiberal narratives. Each of these battles will require political will, legal creativity, technological and journalistic innovation. Naím argues that ranked-choice voting is preferrable to our current first-past-the-post electoral system when it comes to channeling competition for the broader public good.

Civic education, once the mainstay of public education, must be restored to the curriculum and include a new focus on fact-checking and recognizing dis/misinformation. An informed citizenry, concludes Naím, that actively participates in civic affairs through mechanisms such as citizen assemblies is the best defence against the autocrats.

The Revenge of Power is in many ways the sequel to his previous book, The End of Power (2014) in which Naím argued that power was becoming increasingly diffused to new and agile actors who were adapting to technology. Being big, concluded Naím, did not necessarily translate into being the most powerful, especially when it came to militaries that were having to adapt to asymmetrical warfare.

Both books draw on Naím’s diverse, polymathic experience. Before moving to the United States, where he is now a distinguished fellow at the Carnegie Endowment for International Peace, Naím served as Venezuela’s trade minister and then director of its Central Bank, then executive director of the World Bank. He then edited Foreign Policy for 14 years (1996-2010), receiving the Ortega y Gasset award (2011) for his contribution to journalism in the Spanish language. Last year, he published a thriller: Two Spies in Caracas, set in Venezuela as Hugo Chavez begins to seek power. Naím continues to host and produce Efecto Naím; a weekly television program on international affairs that airs throughout the Americas.

The Revenge of Power is intelligent and provocative. Naím offers original insights backed with facts, figures and fascinating factoids. He criss-crosses the disciplines of politics, economics, philosophy, trade, religion, and science and technology with ease. It is depressing when contrasting the challenges to democracy against its too-limp defences. Indifference, denial and delay only serve to advance the new autocrats.

The Revenge of Power should help to reinforce and motivate efforts like the Trudeau government’s much-promised, much-delayed “peace, order and good government” (2019) initiative to establish a “Canadian centre to better support democracy and good governance around the world.” (2021). As a start, we should be investing more in existing Canadian institutions like the Parliamentary Centre, which is dedicated to “supporting inclusive and accountable democratic institutions.” As Naím observes, “The times call for bold experimentation in government – not just innovative policies, but also innovative ways of making policy.” It’s how we will beat back the autocrats.