Following the actions of China internationally and in respect of the diplomatic and trade dispute still ongoing with this country, Canada will strike an all party committee to study and  recommend policy regarding dealings with China.

ListenMany political analysts in the recent past have suggested that Canada take a harder line against China. While internationally China has been criticised over its human rights abuses and such things as occupation of the South China Sea, relations with Canada have become particularly frosty.

This comes mostly from Canada’s detention of Huawei executive Meng Wanzhou on an extradition request from the United States.

China responded by arresting two Canadians on what were widely viewed as being vague charges and simple retribution and suddenly upping the charges of two other Canadians arrested for alleged drug offence to that of a death penalty.

The opposition Conservative party has long pushed the Liberal government to take a harder line and last week in a vote in the House of Commons, they were supported by members of the other opposition parties in a request for an all-party committee to study China policy and make recommendations to the government. Conservative foreign affairs critic Erin O’Toole tabled a motion to “appoint a special committee with the mandate to conduct hearings to examine and review all aspects of the Canada-China relationship including, but not limited to consular, economic, legal, security and diplomatic relations.”

The Liberals had argued there was no need for such a committee as any such issues or policy reviews could be handled by the Commons foreign affairs committee. They opposed the motion but lost 148 to 171 in the first vote for the newly re-elected government. 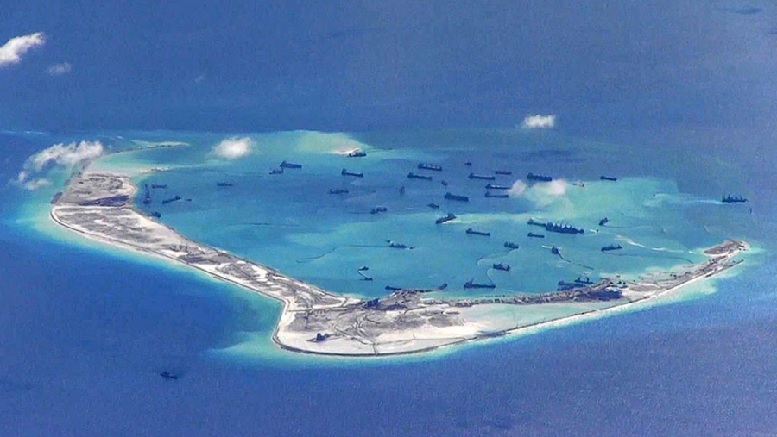 Subi Reef, part of the Spratly chain of islets in the South China Sea, is seen in May 2015. China has been building up miltary reef bases in the sea to bolster its territorial claim to the area, which has been rejected by the U.N.and condemned internationally especially by countries in the region. (courtesy of the U.S. NAVY)