WASHINGTON (Reuters) – President Barack Obama on Thursday turned the page on years of shaky ties with Canada by staging a lavish White House welcome for Prime Minister Justin Trudeau, making clear the new leader is a man after his own heart.

Trudeau, 44, the left-leaning Liberal Party leader and son of former Prime Minister Pierre Trudeau, took power last November. He already enjoys a closer bond with the Democratic president than his right-of-center predecessor, Stephen Harper of the Conservatives, managed in more than six years of dealing with the Obama administration.

“He campaigned on a message of hope and of change. His positive and optimistic vision is inspiring young people,” Obama said after meeting with Trudeau in the Oval Office.

“So, from my perspective, what’s not to like?” he added, also noting Trudeau’s commitment to the environment.

Keeping good relations with the United States is critical for Canada, which sends 75 percent of its exports to its southern neighbor. Trudeau brought along six Cabinet ministers in a sign of how seriously he took the visit.

Obama struck a warm, informal tone from the start and told Trudeau at a state dinner he “may well be the most popular Canadian named Justin.” Singer Justin Bieber is from Canada.

The White House dinner was the first for a Canadian leader since 1997. Obama never did the same for Harper, who irritated the administration by insisting it approve the Keystone XL oil pipeline. Obama blocked the project last year.

At an arrival ceremony on Thursday morning, Obama teased Trudeau about the failure in recent years of Canadian hockey teams to win the sport’s top honor.

“Where’s the Stanley Cup right now?” he asked. “I’m sorry. Is it in my hometown with the Chicago Blackhawks?”

Trudeau replied there was a high U.S. demand for Canadian exports, including three of the star players who helped the Blackhawks win the National Hockey League championship last year.

In Ottawa, Conservative Party foreign affairs spokesman Tony Clement said Trudeau’s visit had little deeper meaning, given that Obama would out of office in January 2017.

Even so, the next few months could be crucial for Canada, said Colin Robertson of the Canadian Global Affairs Institute, a former senior diplomat with two U.S. postings.

Encouraged by Obama’s tone, American officials are starting to re-examine important elements of the bilateral relationship in a favorable way, Robertson said.

“The next administration is not going to have Canada on their radar,” he said in a phone interview. “But their reference point when they do … will be this review conducted under the best possible auspices.” 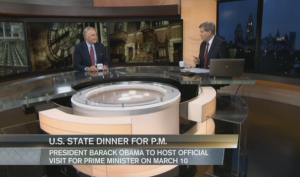