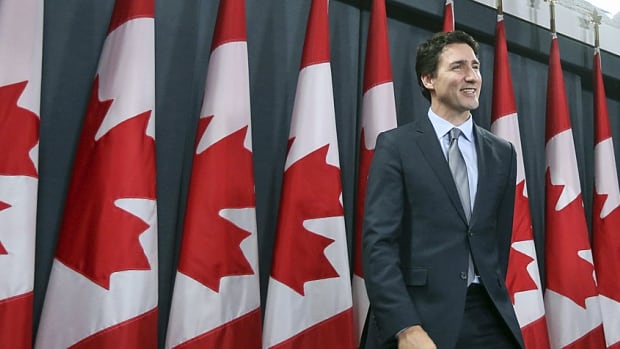 Off to see the world. Prime Minister Justin Trudeau heads out today for a week-long stretch of international summiting, beginning Saturday in Turkey and finishing up next week in Manila. (Chris Wattie/Reuters)

Trudeau on refugees and Premiers meeting 1:57 Chris Hall is the CBC’s National Affairs Editor, based in the Parliamentary Bureau in Ottawa. He began his reporting career with the Ottawa Citizen, before moving to CBC Radio in 1992, where he worked as a national radio reporter in Toronto, Halifax and St. John’s. He returned to Ottawa and the Hill in 1998.

He’s still flying high at home. And now Justin Trudeau takes off on his first foreign trip, a week-long journey to attend economic summits in Turkey and the Philippines that will bring him face-to-face with leaders of some of the most powerful countries in the world, each of them intent on gauging — and engaging with — the new prime minister.

For many of those leaders, Trudeau is the first Canadian prime minister not named Stephen Harper they’ll be dealing with on the world stage.

U.S. President Barack Obama has already lined up a formal bilateral meeting with Trudeau late in the week when the two are at the Asia-Pacific Economic Co-operation Summit in Manila.

Others are also setting up chats at the G20 meeting in Turkey this weekend. That list now includes China’s Xi Jinping, Mexico’s Enrique Pena Nieto and Italy’s Matteo Renzi, who, for what it’s worth, is three years younger than Trudeau.

What this all suggests is that beyond the grip and grin and the “family photos” that characterize these summits, there’s a strong interest in measuring the new Canadian leader through a more substantive discussion of the issues.

And Trudeau knows it, telling reporters on Thursday he intends to put the same issues before these world leaders that he put in front of Canadians.

But the global economy is not the only issue Trudeau will have to confront. The war in Syria, climate change and the new Trans-Pacific Partnership trade deal will all be discussed.

Turkey, the host of the G20 gathering, is trying to cope with the influx of an estimated two million refugees who are fleeing the violence in neighbouring Syria and Iraq.

Turkish President Recep Tayyip Erdogan added the conflict to the summit’s normal agenda of global economic issues, insisting the world needs to do more to respond to both the refugees crisis, while expressing concern over the coalition’s efforts to contain the ISIS threat.

Turkey believes Syrian President Bashar al-Assad has to be removed from office before any lasting peace can be brokered. But Erdogan’s new government is also worried that international efforts to arm and train Kurdish fighters — Canada is involved in the training — in the war against ISIS poses a threat to Turkey’s own internal security.

It’s a delicate balance for any political leader, let alone a Canadian PM whose government only took power last week. 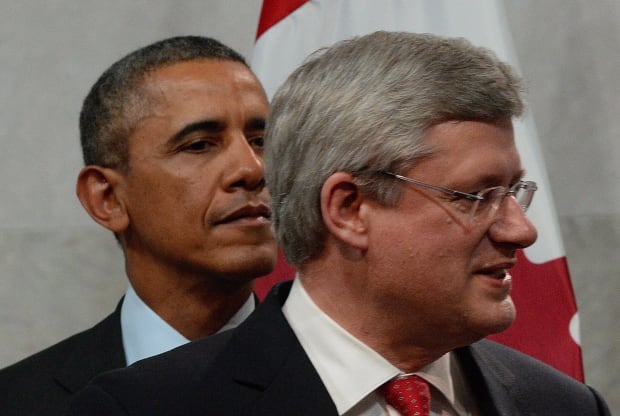 Not always the closest of international partners, former prime minister Stephen Harper and U.S. President Barack Obama were nonetheless thrown together for much of the last decade. Obama’s tour of duty is almost over as well. (Sean Kilpatrick/Canadian Press)

Trudeau’s already signalled that Canada intends to resettle 25,000 Syrian refugees by the end of the year, and that his government will end Canada’s participation in the air strikes against ISIS targets.

“I made it very clear during the election campaign that it is Canada’s intention to withdraw from the bombing mission, but to do so in a way that is responsible and in coordination with our allies, to continue to demonstrate that Canada is committed to the fight against ISIS as a member of the coalition in the fight against ISIS,” he told reporters on Thursday.

He added the government would have more to say about that role in the weeks ahead.

Former Canadian diplomat Colin Robertson says that first pledge to help resettle refugees will be well-received. And he believes Trudeau’s decision to withdraw from the air mission in Iraq is a bigger media story than a real point of contention with the the U.S. because the Americans recognize the Canadian military’s expertise at training and in helping anti-ISIS forces identify legitimate bombing targets.

“As long as we are staying involved and helping with training — that’s a more important contribution,” Robertson says.

He also suggests that the bilateral meeting with Obama provides a chance for the two leaders to talk about climate change, North American energy security and the Pacific Rim trade deal.

“Obama is very much looking at legacy,” Robertson says. “The Trans-Pacific Partnership is part of that. So is climate change. So he and Trudeau will have a lot to talk about.”

China isn’t part of the Trans-Pacific deal, and David Mulroney, a former Canadian ambassador to China, says that makes the face-to-face discussions with Xi delicate. 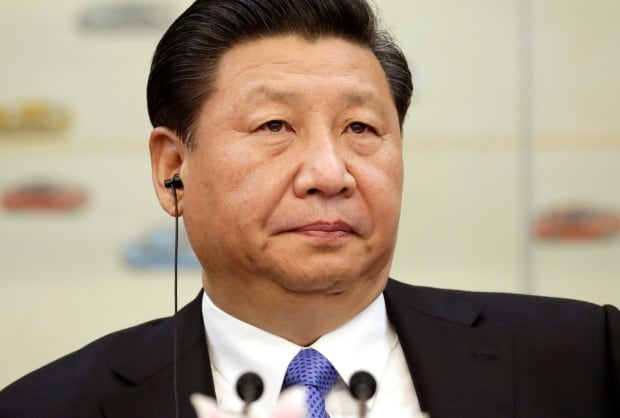 China’s President Xi Jinping is hoping to have a one-on-one with Trudeau at the G20 in Turkey this weekend. They are two leaders who could share the world stage for a while. (Jason Lee/Associated Press)

His advice: “Don’t over-commit. Pick your issues, and they should be largely economic.”

The latter part is important. China is locked in a dispute with the U.S. and many of its Asian neighbours over its territorial claims in the South China Sea — claims based in part on the creation of man-made islands in a busy international shipping area.

Mulroney, who is now president of St. Michael’s College at the University of Toronto, says that, under Stephen Harper, Canada skipped many ministerial-level meetings with APEC members, sending diplomats instead.

“You can’t just say ‘Canada’s back’ to the other leaders. Well, we can say it, but it doesn’t mean anything if Trudeau doesn’t deliver. He has to re-engage with Asia.”

Mulroney says that means building relationships, establishing the bonds and trust so you can at some point raise what he calls the difficult issues such as security and human rights.

“Justin Trudeau needs to demonstrate that he has strong negotiating skills as well as the personal qualities that attracted and excited Canadians in the last election.”

That demonstration begins this week.