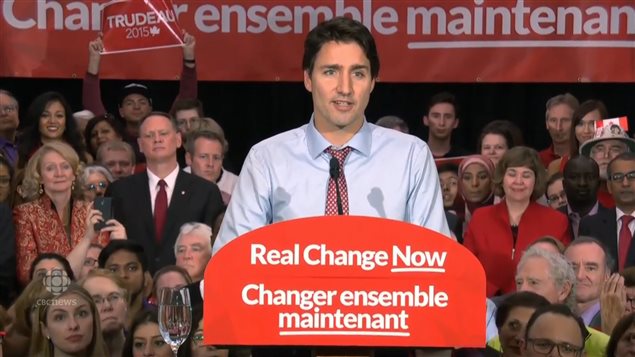 “To this country’s friends all around the world… We’re back,” said Justin Trudeau after being elected the country’s new prime minister.
Photo Credit: CBC

Canada’s next prime minister has vowed to resurrect the country’s active role in world affairs.  “Canada, in a sense, left the field,” says Colin Robertson, a former diplomat and vice-president of Canadian Global Affairs Institute.

Under nine years of Conservative government, Canada engaged in peace and security dossiers in Afghanistan, Libya, Ukraine and the fight against ISIS. But it had withdrawn from the softer international initiatives and several United Nations bodies including the General Assembly.

‘We didn’t participate in the same way’

“It has been noticed by other countries that we didn’t participate in the same way in say, disarmament, refugees, migration, even though we held up our migration levels,” he says. “This particularly came to a head more recently with the Syrian and the larger, global migration crisis where we were seen to be less than generous.”

The day after he won the federal election, Prime Minister-designate Justin Trudeau announced that things would change.  “To this country’s friends all around the world — many of you have worried that Canada has lost its compassionate and constructive voice in the world over the past 10 years. Well, I have a simple message for you: on behalf of 35 million Canadians: We’re back.”

Trudeau promised to resettle 25,000 refugees before the end of this year. He also called a meeting of the premiers of each province to discuss climate change and he invited them to come with him to the UN Summit in Paris in December. He will also have meetings of the G20, APEC, and he has said he wants to examine the recent Trans-Pacific Partnership before agreeing to implement it.

‘Earning our way back into good global citizenship’

Trudeau has vowed to withdraw Canada’s six CF-18 fighter jets active in coalition bombing raids against ISIS. But he would replace that with training or other peacekeeping efforts.

“So it is a fairly busy international schedule with both the classical peace and security issues, as well as trade and economic issues, and humanitarian and people issues on the agenda for Mr. Trudeau,” says Robertson.

“Earning our way back into good global citizenship requires money and time,” wrote Robertson in a recent editorial, adding, the new prime minister will have to decide where Canada wants to play a role in the world, what it wants to achieve and how much it will spend.