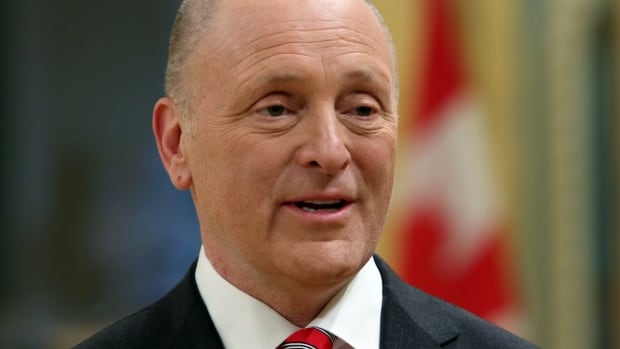 “I’ve been invited to go visit with the prime minister at his request,” Heyman said after he was officially welcomed by the Governor General at Rideau Hall.

“I very much look forward to that meeting. It’s his meeting and his agenda,” Heyman told reporters.

The Prime Minister’s Office issued a statement Tuesday evening to say the government congratulated Heyman on his appointment and that it looked forward “to building on the strong economic relationship with the Obama administration.”

“We are committed to advancing shared priorities with Ambassador Heyman, including increasing trade, creating jobs and enhancing the security of our residents on both sides of the border,” the statement said.

Heyman, the first U.S. ambassador to Canada to use Twitter, wore his “lucky” Obama cufflinks and an American-Canadian flag pin given to him by his predecessor when he presented his credentials to David Johnston — a formality that each ambassador must go through before getting started on the job.

Since his arrival in Ottawa, Heyman and his wife Vicki, who are both active on Twitter, have had coffee from Tim Hortons, purchased cookies made famous by U.S. President Barack Obama during his first foreign trip in 2009, and attended Politics and the Pen — an annual fundraiser that brings together a who’s who of politicians, diplomats, journalists and business leaders.

Heyman was hand-picked by Obama to be the top American representative to Canada on Sept. 19, but it took six months for his nomination to work its way through the political process.

A top fundraiser for Obama and a 33-year veteran of Goldman Sachs, Heyman was sworn in during a ceremony in Washington, D.C., on March 26, after being confirmed by the U.S. Senate on March 12.

Heyman passed his first test as ambassador on Tuesday when he declined to comment on Monday’s election in Quebec, saying it was a domestic issue.

“I represent the United States in its relationship with Canada. I congratulate the victors and look very much forward to meeting the new premier, as well as all the premiers,” Heyman said.

There is no doubt the ambassador will have his work cut out for him with most of his time focused on the economy, energy, the environment, trade and security.

Here is a list of six issues set to dominate Heyman’s agenda:

No issue has dominated or soured the relationship more than the controversial Keystone XL pipeline, which would carry Alberta’s oil to refineries on the U.S. Gulf Coast.

“Top of the prime minister’s list is the presidential permit for the Keystone XL pipeline that has been stretched on into its sixth year,” said Colin Robertson, a former Canadian diplomat and current vice-president at the Canadian Defence and Foreign Affairs Institute.

In his first public comments on Tuesday, Heyman said he was on the same page as the Obama administration but that he came bearing “no news” other than saying “the process is underway and a decision is forthcoming.”

While the decision could come at any time, it is also possible that it could be punted again due to the U.S. midterms.

A U.S. State Department report published in January was the most recent in a handful of studies showing that the Keystone XL pipeline would not significantly increase greenhouse gas emissions.

2. Energy and the environment

The discussion around the Keystone XL pipeline will give Heyman the opportunity to breathe new life into the energy dialogue, Robertson said.

Heyman addressed the issue when he was asked by reporters on Tuesday whether Canada ought to move forward with legislation to further reduce greenhouse gas emissions.

‘I think today you can be pro-economy and pro-energy and considerate of the environment.’– Bruce Heyman, U.S. ambassador to Canada

“The president has made it clear, so has the secretary of state: global warming is real. We all have to be cognizant that it’s real and that we’re all affected by it.”

“The United States looks forward to working with the Canadian government and working on these issues.”

Heyman said what concerned him most is the notion that a strong economy would have to come at the expense of the environment.

In a February letter to the U.S. State Department, Canada’s Ambassador to the U.S. Gary Doer said Canada was “committed to further action including regulations for our oil and natural gas sectors.”

Prime Minister Stephen Harper said in December, the government was “certainly prepared to work with the United States on a regulatory regime that will bring our emissions down.”

As CBC News reported last week, the Canadian government has been urging the Obama administration to pay for its share of the costs of building a customs plaza on the U.S. side of a planned bridge linking Detroit and Windsor.

Canada has been working under the assumption the U.S. would pay $250 million to build the customs plaza, but a lack of money allocated in the U.S. federal budget in March has sent a signal that funding for the project could be at risk.

Heyman said Tuesday he was familiar with the issue but would not comment further until he had the opportunity to discuss it with the federal government first.

“This is an issue that I look forward to sitting down with members of the Canadian government and just getting a better understanding of where we are,” Heyman said.

Robertson thinks that a possible compromise could be for the two countries to have a shared customs.

“If we’re thinking outside the box and more innovatively, and how we can save taxpayers money, why don’t we just have one plaza?”

“This is a serious but unnecessary irritant,” said John Manley, former deputy prime minister and current president and CEO of the Canadian Council of Chief Executives.

While there is much work left to do around the joint U.S.-Canada Beyond the Border initiative, Manley said “Canada will need to get its act together on oxycodone.”

Several U.S. officials, from the U.S. drug czar to more recently U.S. senators, have urged the Canadian government to stop the production of a form of oxycodone which has been pouring south into the U.S., where it is banned.

The issue has become an increasing nuisance for the U.S. government, which is taking steps to address the problem domestically, only to see their efforts compromised by Canada’s lax prescription drug strategy.

If Canada wants to address border fees and other irritants to improve border congestion, it will have to address U.S. concerns around oxycodone.

Heyman has already said that intellectual property will be “a priority.”

The U.S. will push Canada to give it the same IP protections for pharmaceutical innovators that are included in the Canada-EU free trade agreement.

“They want to ensure that everything from the films they make to the drugs that they patent are protected,” Robertson said.

“In Canada we tend to give less time for absolute patent protection before we open it up to competition from generics. This is something that the Americans are pushing us on.”

These protections may be important in future negotiations over the Trans-Pacific Partnership.

The Trans-Pacific Partnership is a free-trade deal aimed at further expanding the flow of goods, services and capital across borders between a dozen countries including Canada and the U.S.

The American are pushing Canada hard on supply management with U.S. trade representative Michael Froman recently calling on Canada to put more on the table in its negotiations.

The Americans would like greater access for its dairy and poultry products, but what Canada can get in return is not yet clear, Manley said.

“Moving on supply management is not an easy thing to do,” he said.

In a speech Heyman gave during his swearing-in ceremony in D.C. last month, the U.S. ambassador described the relationship between the U.S. and Canada as “special but also enduring.”

“The relationship remains strong,” he said

“I believe that individual disagreements enhance the enduring strength of this bilateral relationship, as only true friends have the courage and trust to be honest with one another,” Heyman said.

He spoke about the $2 billion in goods that flow across the shared border, shared resources and military co-operation with the North American Aerospace Defence Command (NORAD.)

“There is more we can and will do together. I look forward to working to drive outcomes,” Heyman said.